A couple months ago, I read Daily Rituals by Mason Currey, a book that many bloggers have been chatting about recently.  Man did this collection make me feel better about myself as an artist. He has collected the daily routines of famous and historic writers, artists, scientists, and other great minds throughout history.  By breaking down how each person spent their day, it is A.) a fantastic read for someone with a short attention span like me and B.) incredibly humbling and inspiring.

The most eye-opening part?  They were all regular people, who ate meals and did chores, had crazy sleeping schedules, and errands to run.  They’re like you and me!!  Doing people things!  So I tackled the whole “if they can do it, I can give it a go” mantra and broke it down.

These are some of the themes I spotted (The quotes are all pulled from Mason Currey’s Blog, also listed above.)

1. Consistency, even when life takes a turn: On Joseph Campbell: “So during the years of the Depression I had arranged a schedule for myself. When you don’t have a job or anyone to tell you what to do, you’ve got to fix one for yourself. ”

2. Drugs, drugs, drugs: On Paul Erdos: “Erdös first did mathematics at the age of three, but for the last twenty-five years of his life, since the death of his mother, he put in nineteen-hour days, keeping himself fortified with 10 to 20 milligrams of Benzedrine or Ritalin, strong espresso, and caffeine tablets. “A mathematician,” Erdos was fond of saying, “is a machine for turning coffee into theorems.”

4. Above all, doing whatever the hell works for you: On Gary Panter: “Get up at 7:30 in the morning — feed cats, drive daughter to school, read the NY Times and drink chocolate milk.”

5. A wonderful amount of interestingly-timed whiskey.: On Winston Churchill: “At 11:00 a.m., he arose, bathed, and perhaps took a walk around the garden, and took a weak whisky and soda to his study.”

There wasn’t a single artist that was the same, thus disproving any self-help/success guru that claims there is one way to do things.  But looking at this list, obviously there are some things I can do without.  I need to go to work, so an 8 hour regimen is not possible yet.  If I stayed home all day, I would probably start to go crazy.  Drugs aren’t up my alley.  I get nervous when I take too much Tylenol.  So scratch that.  Guilt?  I was raised Catholic, so I am not in short supply of guilt.  Consistency!  Heeeey, there’s something I’ve never been great at, that may do!  And whiskey.  I can keep that part.  I would be up for making Moscow Mules a brunch staple.

Taken on the Camino!

For the past four weeks (at least on weekdays, all bets are off on weekends), I have gotten up a little earlier than usual to write and do about 5 minutes of yoga before hopping in the shower and going to work.  At first I thought:

This isn’t going to last, it will be like one of those Pinterest Yoga challenges I desert for sleeping in by day 4.

It’s so dark out in the morning, this is depressing, I am in my dark living room doing yoga with my cat chirping at me.

But it’s wild: the more I did it, the more I couldn’t imagine not doing it before work.  It’s still slow, I am not about to join a 6am yoga class or anything, but I have found that I am no longer an evil anxious human being while getting ready.

And what’s even more fascinating: without planning or following some sort of guide, my yoga and writing have been going a bit longer each morning.  Thanks to my cat who wakes me up for food at 5:45am, I have a natural alarm clock.

The other wonderful thing about writing and yoga at this specific hour is watching the days get longer through the winter.  When I first started, it was still dark by the time I headed off to the shower.  Now, the sun is rising as I start yoga.  I am so much more aware that Spring is on its way, no matter what this little asshole says next week.

Strangely enough, I didn’t expect the ritual to grow into something far more important than exercise and journaling.  Of course this makes sense, if you do the same thing every day, you’re going to feel more comfortable with it.  Right?  But I honestly didn’t assume that 20 minutes out of my day would make much of a difference.

I recognized I had made a yogic breakthrough when I no longer wanted to smack my very loving cat the moment I rolled out my mat (Hey I rhymed!).  Whenever I stretch down to floor level in a sun salutation, here comes Tiber, our overfed dog-like cat rolling, cooing, and running back and forth under my downward dog like I’m a playground bridge structure.

At the end of my practice, I meditate for a few minutes while Tiber purrs and occasionally makes his signature “chirping” noise that translates into, “Hhhey….Heeeey….Hey youuu.”  With each chirp, he pats my knee with his claws half extended.  It’s great.  After many days of shooing him away, lightning struck.  All of my Buddhism instruction talks about remaining in the moment while meditating, not closing your eyes and drifting off into philosophical la-la land, a common misconception. So Buddha Tiber (he has the belly for it) is the present moment saying, “Heeey…stop thinking about cleaning the floors.  Hey, yes we still have cereal…heeeeeeeeeey, HEY.”

When I thought of this, I chuckled, gave him a pat, and he stopped chirping.  He purred, which was way more calming than my spastic thoughts. 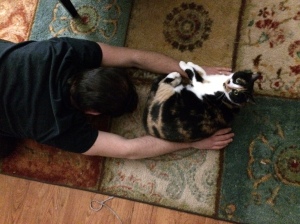 Since I have learned to work with my furry yoga partner, I have been noticing other helpful things about his distractions.  He is often standing exactly where I was about to put my foot, causing me to have to look where I am placing it.  This was often mentioned in yoga classes I took anyway, but I never really understood its importance.  When I look before I place, much like spotting in dance, I see where I am headed and have less of a chance of flailing around like a drunk person. 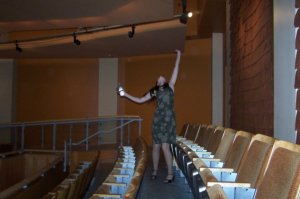 I am more present, because I don’t want to kick Tiber, and I feel more in control of the movements.

What does any of this have to do with a book about rituals?

What I loved most about the routine book is that each artist built upon their work, slowly but surely through some consistency.  And because of this, they found a direction, however abstract.  It’s hard to have direction as an artist when so much is out of your control.  You can build it, but you don’t actually know if they will come.  So I find setting a goal is tricky, and they often sound too abstract to act on.  Building on the smaller things is actually in my control, and they just take time.  I feel I have made some progress at the end of the day, however little, and this is invaluable.

Writing and exercising each morning is something I can act and build on, and I have already started to learn from it.  So I tip my hat to you, Mason Currey.  Thank you for showing me that accomplished artists live regular lives like the rest of us in the same world we know.  It’s not on some magical wealthy creative cloud that we can’t reach, but usually in their living room, with dirty dishes in the sink, and maybe some whiskey.

3 thoughts on “Rituals, Direction, and How to Not Kick Your Cat While Doing Yoga”