For the final 30 days of my twenties, I am writing one personal narrative a day that has impacted my life until now.  To read more about my challenge, feel free to check out the first post.  Today’s theme is, “The farther you go.”  Whatever that means to you, feel free to comment, link your blog, or repost online with any stories of your own.  Thanks for reading!

Day 2: The Farther You Go…or, That Time I Rapped with Nuns in Spain

Although I attended six years of Catholic school, I wouldn’t say I came out of it much of a Catholic—at least not in the traditional sense.  I developed a strong resentment toward my patronizing and judgmental school experience, full of plaid jumpers and a brutal social caste system, and then totally cut the cord in high school when my church yelled at my family for not sending me to CCD even though my mom was going through serious chemo.  As usual, people not following the teachings of the church scare away its followers.

But when the Camino de Santiago fell into my lap during a program in college, I reconsidered the role religion had played in my life up until then.  To put this story in a nutshell, I studied the Camino that year and then decided to walk the whole kit and caboodle with my friend Claire after we graduated in 2009.  It was a turning point in my life, as well as a turning point for how I viewed organized religion.  I wouldn’t say I ever had a “come to Jesus” moment—if anything, Buddha became even more of my jam, but I did leave with a greater inner peace about the original intentions of the Catholic traditions.  I left with a new belief in humanity, and new hope that community can triumph over a broken system, no matter which tradition is followed.

I will intersperse Camino stories throughout this project, but this is one that particularly stands out. 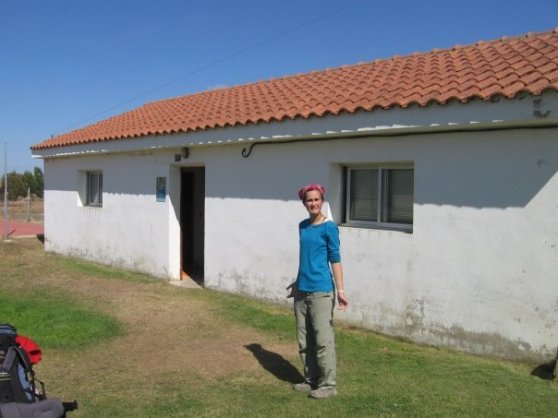 In a town without a name (to my knowledge), Claire, Courtney and I stopped for the day after a sweltering, particularly exhaustive day on the Camino.  It was sometime during week four—when you can just taste the final week upon you, but you haven’t quite reached the beautiful fairy-tale greenery of Galicia—a true gift after three weeks of desert and industrial cities.  My foot had been bothering me, and this was one of the first times that I declared we should stop for the sake of a possible injury.

When we arrived in town, a lack of hikers in either direction should have been our first red flag. None of the usual painted “Albergue” signs lined the streets to point us toward a hostel, and no one lurking on the streets looked particularly excited about our arrival. Actually, there barely seemed to be any locals at all, just a lot of sheep.  It looked like an abandoned film set–but with sheep.  After about twenty minutes of wandering, we were pointed toward a strange hut with an unlockable door.  Two creepy beds sat in the back room, and the bathroom and electricity seemed to be out of order.  Our hopes for a restful afternoon began to plummet.

“It will all look better after we eat!” we all agreed, and off we went to the local bar.  As if out of a movie, a record seemed to scratch to a halt as we entered the bar.  A line of older men turned to glare in our direction—they appeared to be the only active members of the town.  As they eyed us, we realized we were planning to spend a night in an unlocked, sketchy hut–without an owner–in a town of men that liked to stare a little too long.  So, new plan.

The next town, Bercianos Del Camino, was three kilometers away, a painful distance after walking 23 earlier than day.  Also, the sun was starting to set, my foot was swollen, and we risked getting turned away arriving this late.  On the other hand, this was one of the first times in the four weeks of hiking that our safety alarms were out-yelling our body alarms.  We headed back on the road into the later-afternoon heat.

When the new hostel was far on the horizon, I began to prep my mind for being turned away.  If we had to finally break down and take a taxi to ensure a safe evening, so be it.  We came this far without “cheating” and there was only so much to be done.  The tall, pueblo-esque building was ornately decorated, and consisted of a curious architectural style we had seen in many of the smaller villages throughout Spain.  It looked as if it was literally built with mud and sticks, and that perhaps a strong rain would wash it down the walkway. 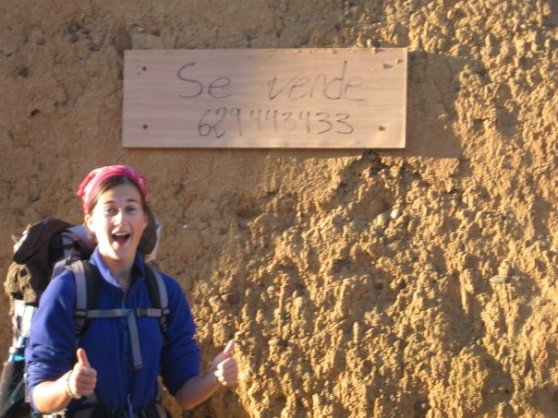 With heavy hearts, we opened the door and approached the two nuns at the front desk with apologetic eyes.  “Hay tres camas?” we asked, and Claire explained in her sturdy Spanish that we were sorry for arriving so close to dinner.  She was warmly cut off, told that there were plenty of beds and to sit and have a cold glass of iced tea from the nearby pitcher.  We looked at each other in disbelief with the same thought—did we die?  Is this heaven?  Am I actually passed out somewhere in that creepy hut? 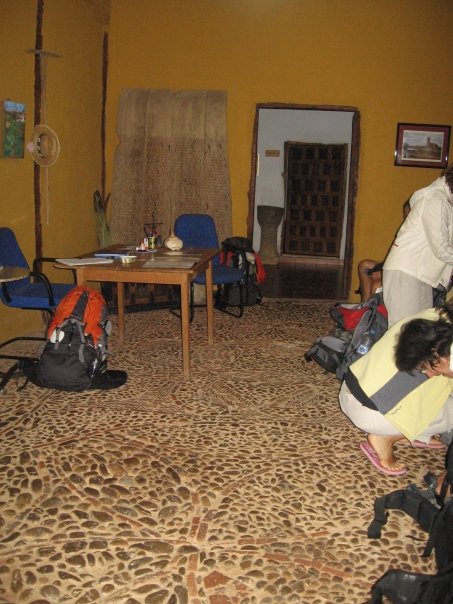 We took a seat and gulped down the most refreshing, crisp iced that has ever been brewed.  If you want to rediscover your taste buds, take on a huge physical challenge.  I can still tell you all about a plate of ribs I had in the middle of the mountains one night–maybe that’s for another blog post just called “Awesome Ribs.”  Anyhow, we went upstairs to lay our stuff by two bunks and began to reconnect with many hiking friends we had lost touch with over the past few days.  Turns out, they were just half a day ahead of us.  The Canadian couple, Daniel and Peter Pan (As you can see, we had nicknames.  We were apparently “the three American girls”), and even the lovely group that carried sunflowers in honor of their fellow hiker with cancer, were all there.   It was like the reunion at the end of LOST, but with much less confusion.

Dinner is called, and we hurry downstairs to respect the nuns’ request we all eat at the same time.  This was a hostel where eating together was of highest priority.  I was about to see why.  An older nun of an undistinguishable age stood for a moment at the head of our long wooden table and bowed her head.  I expected group prayer with the church-run hostels, and around me, hikers of all religions bowed their heads in respect as well.  Just then, the sister leans over her precarious body and begins rhythmically pounding on the table. Next, she looks up and locks eyes with each of us, demanding we join in.  The beat fills the room.  And then, with a quick breath, and sheer disbelief from the hikers, this nun begins to rap grace in Spanish.  She is rapping.  She is rapping grace.  We carry her beat throughout the prayer and applaud wildly as the other nuns join in.

This phenomenal, passionate display concludes as the group molds together into an energy international understanding—past language, past religion. Communal dinner takes off.  We hand out bowls of soup and pasta and the regular wave of deep conversation fills the room.  As the group starts to lead cleanup, the nuns announce that we are welcome to join them in the chapel to pray before lights out.  As I’ve said before, I broke off with the church quite uncomfortably many years before.  I was walking this as a spiritual, persona journey–group prayer often felt invasive to me.  But I was swept away in the beautiful energy of the night.

The chapel was a small, cave-like room, only lit by candlelight.  The walls were made of the same mudlike material that held up the whole building, and you had to duck your head to squat into the chamber.  The nuns asked that we say something we are thankful for during that day.  Unlike the class exercises and Thanksgivings I’ve experienced, these thank you’s were graced with tears, memories of childhood, and tales of physical and psychological feats.  Everyone spoke in their native language, but we all understand their sentiments.

To finish the gathering, one sister asked that we all say Our Father in unison, in our own language, after a “1-2-ready-go.”  The stunning cacophony that floated through those earthen walls began to heal my anger with this ancient religion.  The sincere, purely honest tone of this group prayer trumped my discomfort with public displays of faith.  There was no pressure, just genuine care for those that sat in the room and good wishes for those hiking the Camino.

We headed upstairs in silence to get ready for bed.  The group was in sync that evening, we were full of good food, good music, and had come together in a way that rarely happens with strangers.  Around 9pm, just at the height of teeth brushing, the building ran out of water.  Not hot water–all water.  Yes, that was a thing that could happen.  In any other situation, I would brace myself for usual complaining and petulance.  But there was nothing.  We improvised our teeth brushing, kept enough water to drink throughout the night, shared if we needed to, and waited for things to get back to normal.  The group headed to bed in peace and I slept soundly surrounded by love.

In the morning, the water was back and we all headed out with gratitude for the sisters’ care and new enthusiasm for this rare adult-summer camp-like experience we had all come across.  It was astonishing to think how different my evening would have been if we had stayed in the previous town.  An extra 45 minutes of walking on a swollen foot and one of the longest days of hiking, brought us to a purely stunning and spiritually revitalizing evening.  The Camino was packed with obvious metaphors, and this was another to add to the books.

2 thoughts on “Day 2: The Farther You Go…or, That Time I Rapped with Nuns in Spain”