I had a story ready to go for today’s challenge, but after this morning’s events, it seems inappropriate. My husband Ben is okay, but his train pulled in minutes after the Hoboken crash and he was present during the early shock of the accident.

I had a strange start to the morning–a bizarre pedestrian yelled at me when I was trying to leave the Montclair station from dropping off Ben, I got over-emotional setting up a meeting at work (for unknown reasons) and then I helped clean up coffee that had spilled all over a counter because a colleague brewed it without setting down the coffee pot.  It was just one of those weird, nothing-seems-right kind of mornings, as if the world was off balance.  When I stopped by my desk, Ben messaged me that his train was running late and that everyone was complaining.  I told him about my funky mood swing over work grouchiness and that was that.

Fifteen minutes later, he texted me to say he was okay.  I feel like after 9/11, messages like that send your body into shock– because something has happened.  On the flip side, it’s good that we know to send these messages to our loved ones before anything hits the news or cell service goes out.  His train had pulled in minutes after the train crash.  The thought we both have, which is not worth exploring, is that his train happened to be late by a few minutes. You can drive yourself crazy with these thoughts. 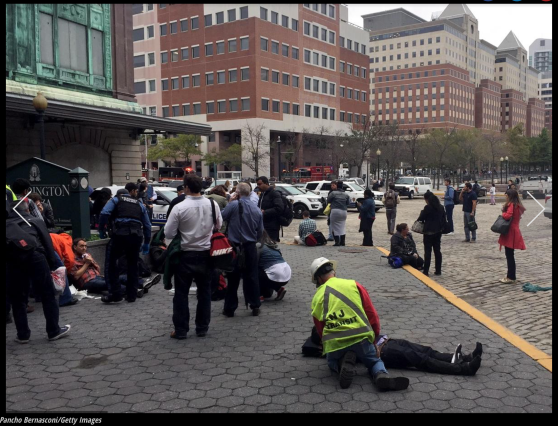 Found a news photo with Ben in the background, which make everything even more surreal. He’s the one walking away with the brown backpack. Don’t play Where’s Waldo with me, you will lose.

I left work and tried to drive toward Hoboken.  I found a radio station with updates as they came, but by the time I reached 1 and 9 outside of Jersey City, 1010 was warning that police were turning vehicles away from Hoboken.  He was right, every entrance was closed.  I am very lucky that I spent almost three years living in the area, and weaved my way through Jersey City Heights until, 45 minutes later–I emerged on Newark Ave in JC.  Ben walked across the highway by the Holland and I emotionally met him in Hamilton Park.

Now we’re home, feeling that surreal feeling when your day takes a terrifying, but at the same time, miraculous turn.  I am thinking about everyone involved this morning and pray that everyone effected recovers soon.  I also send out deep gratitude to the incredible response from emergency crews that Ben said arrived in a matter of moments.

It’s a cloudy, rainy day, but I will, without a doubt, take a moment and look around with gratitude that we are home safe.  I will take the monotony of making coffee at work over a day like this anytime.