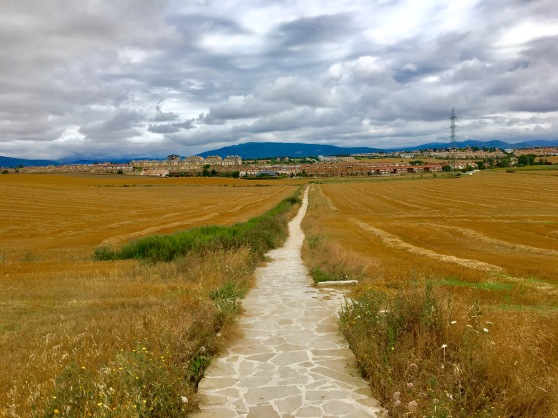 Last night, I went to the Shambala Center in NYC, a Buddhist school with meditation instruction and mindfulness talks open to the public. Robert Chender, a senior meditation teacher of this lineage, lead the evening, centering his lesson around the “stories we tell ourselves” in order to deal with difficult emotion. He explained that one of the aims of meditation is to quiet the voice in the logical part of our brain that either placate or encourages the amygdala–the fear center of our brain. Instead, we’re meant to simply feel what we’re feeling and then let it go.

“Imagine how incredible our lives could be if we stopped believing our own story.” This struck me more than anything else throughout the night. As a writer, my story is my identity–honing and shaping it is my livelihood, my mission. But on the other hand, he’s right–even the story I now use to guide my writing has often acted as a barrier to living my life. When I first thought about going on the Camino, my brain told me that I wasn’t athletic enough to do it. Many people outside my brain said this to me as well. My brain–and my neighbors–also told me that it’s dangerous for a woman to travel alone.

These stories all come from somewhere, but they skew or shroud important facts. They build false bias, encourage unnecessary fear, and can even develop into disgust for yourself or someone else.  No, I wasn’t athletic, but I could train. Yes, it can be dangerous, but I could take precautions. Both Caminos for me became about listening to my natural emotions as they arise without judgment, instead of the long-winded, overly structured story that I’ve written for myself inside my mind. In the regular world, we get too busy to even realize this is happening. On the Camino, it’s impossible not to hear and see our BS stories for what they are–BS.

For the rest of my hike in 2017, I learned that the moment I let go of my “angry story”–“the people around me shouldn’t be making so much noise”, “I’m an insomniac incapable of sleep”, “I shouldn’t have had that extra glass of wine”–once I quieted this voice, I’d often finally drift off to sleep. My story actually kept me awake.

When we left Villava the next morning, I felt much more clear-minded. I’d finally slept, and now I was moving forward with steam, vigor and a desperately missed sense of humor. Hoping to surpass The Running of the Bull, we left early and headed into the stone fortress around the ancient city of Pamplona with determination.

But the moment we hit the center of town–already packed with thousands of drunk revelers–the gates went up to protect the viewers. We’d have to wait for the bulls, and runners, to pass by. Both passionate animals lovers, neither of us had any interest in this tradition, though I was oddly pleased to hear that the bulls were “winning” this year (if you don’t know what that means, you don’t want to know.) 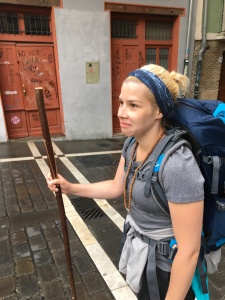 In our waiting, we met a marvelous Swiss man named Oris–a timid and fascinating creature with a delicate voice, a button-up shirt, high socks, and the nicest business shoes I’d ever seen on a hiking trail. We decided to keep each other company until the gates opened up. 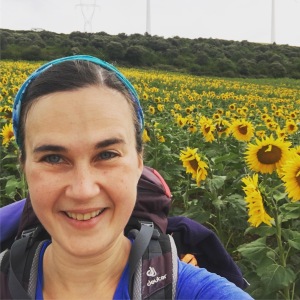 Beyond the city, the land opened up once more into an expanse of cloudy pastures. I felt at peace in my sacred walking rhythm for the first time since we arrived. We passed an equally happy Oris, eating some corn on the cob on the side of the road. You know, like you do, when you’re Oris. Up ahead, we prepared ourselves for the steep climb to the top of the Alto de Perdon–the Hill of Forgiveness. After you scale the sharp, sun-exposed mountainside, decked out in endless rows of sunflowers and massive metal windmills, everyone meets at the windy peak beside a famous statue depicting pilgrims throughout the ages. 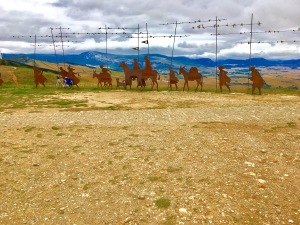 Before carrying on, we turned to wave goodbye to everything that came before. Once you descend the mountain, everything else is blocked by the range. Goodbye, Pyreness. It was a hard four days, and I was glad they were behind me.

The walk down was less-than-poetic. Known playfully as “the knee-wrecker,” the backside of Alto de Perdon is psychological and physical torture–one wrong step and you could roll your foot one of the thousands of rocks, sending you pummeling down the steep trail. Later, a friend of ours admitted that he’d grow irrationally angry at these stones, yelling, “Who put these rocks here?! What an asshole!” He felt personally attacked by the placement of rocks. I was beginning to feel the same way.

To pass the time, and to keep our minds sharp, Christina and I sang through all of Act One of Into the Woods, taking turns one each role as they alternated in the prologue. Who knew that my childhood obsession with the show would ever come in handy?

Our spirits stayed pretty high considering the scorchingly hot day, and we finally managed to joke about the plagues that had followed us in each day so far. “What noisy festival do you think will be in Uterga, tonight?” I asked Christina.

“Oh! Or how about the opening of the town cymbal factory?”

We howled at our cleverness as we went through the list of every noisy possibility that could await us in the little village ahead. 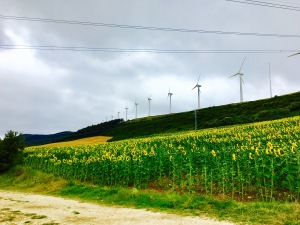 Uterga holds a special place in my heart. In 2009, after a very difficult descent down Perdon, we decided to stop early because our hiking partner, Cortney, had seriously injured her foot. With no beds left in the town, the small bar and albergue offered us a spot in their finished attic to lay out our sleeping bags and crash for the night. The three of us stayed up until the wee hours of the morning, telling each other about the stories that made us who we were–the good and the bad. We talked of things everyone knew about us, and things we’d never told a soul. Like a sisterhood of witches, we conjured up a meeting place perfect for claiming the tales that had formerly claimed us.

I called ahead this year, knowing they only had a few beds, and reserved us a spot. When the hospitalera escorted us up to the rooms, I caught a glimpse of the stairs to the attic and gave a nod in respect to the sacred memory.

Steve, our British friend from Zubiri, awaited us with a glass of white wine on the front patio. Though I was thrilled to see him, I suspected he was the infamous motorcycle snorer. I fully realize snoring is out of your control and I would never blame someone for it. But with his things set up in the bunk beds next to ours, I worried about the chance of sleeping. Also, I felt terrible for ranting about my lack of sleep in his presence before suspecting he was the culprit.

The night carried on calmly–we ate a wonderful group meal, sang happy birthday to the twins, and bought a bottle of ancient muscle salve, which we decided to name “pilgrim magic,” as it healed both our sore joints and persistent heat rash. 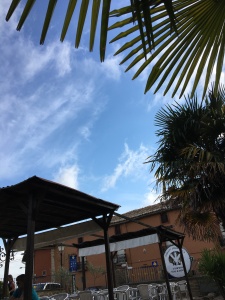 Midway through dinner, I felt my head slump toward my plate with exhaustion and wandered upstairs to shut my eyes just for a minute. Without any effort at all, I dropped into a deep sleep, only awakened in the middle of the night after the whole room had settled in around me, everyone but Steve. When I tip-toed over to the bathroom, I caught a glimpse of some feet on the couch in the living room. He later told me that he knocked out by accident, but I don’t buy it. Can you call someone out on being so selfless? I hadn’t slept that soundly in weeks, and I will always have a deep respect of that small (or not-so-small) gesture of kindness.

We had a big day ahead of us, so I tip-toed back to bed and sunk into a heavenly, long-awaited slumber. 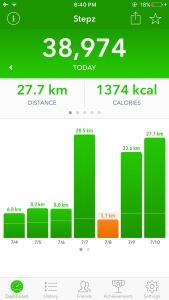