Wanted to say a quick hello to all the sweet new (and not-so-new) followers of my blog. It’s meant so much to see your views, messages, likes, and follows. I haven’t been able to write for myself since March, so I deeply appreciate all of it.

Once you get past the many months of Camino preparations, you have to face the decision you made. The fourth day of walking–I’ve often found–is the moment you realize that it’s time to simply walk. No more airplanes, organizing, saving money. Just walking.

You wake up each morning, stretch damp socks over your tired, swollen feet, and walk back onto the road, hoping to spot the first arrow.

Why? And why does everyone else around you do the same? On the fourth day, I start to truly question why on earth I keep coming back. Maybe none of us fit in with the rhythms of the rest of the world. Maybe something has always felt off to all of us, but here, things feel right.

Some people plan a Camino all their lives, others make a rash decision a few weeks before. One of my Camino friends never even planned to walk it in the first place. She was several months into her travels around the world, learned about the Camino while in Portugal, and just decided to start.

This doesn’t happen with the Appalachian Trail, does it? You just pick up and go because you see the trail, do you? Something bigger, that I will never put my finger on, is afoot here.

We eventually re-found the countryside that fourth morning. Once you leave Barcelos and the roosters behind, the road gets a bit softer and winds its way through more cornfields and up some welcomed elevation after a rather flat start.

With the skies cloudy and gray, I turned to my music to brighten the backdrop of the scenery. You can hear more of your music in the silence of the middle-of-nowhere. It all sounds like new music without the low hum of New York City to drown out its intricacies.

I looked forward to the end of the day. My app alerted me of a very special albergue called Casa de Fernanda, a place that was said to uphold the original Camino energy. Fernanda and her family maintained a fairytale-like garden of overgrown pumpkin and grape vines, a blazing fire for resting and warming your feet, and a small wooden building with lines of bed for pilgrims.

Each night, they’d open then dining room to their guests, lining them up at a long wooden table for a family-style table, bottles of wine, and tastes of a special local port.

Just before coming up on Fernanda’s home, I spotted Sophie in the distance. My group had booked a bed there when I’d mentioned it back in Rates so we were all met to meet up at the end of the day.

“I’m listening to your playlist!” Sophie hollered back to me.

“I’m listening to it too!” I answered, raising my arms in excitement.

I expected to find a small town before reaching Fernanda’s but instead, was greeted by an entrance through a patch of vines and overgrown bushes instead. It was the secret garden of my childhood dream.

Ducking through the doorway, I followed a stone path where several speckled ducks, a collection of sassy kittens, and a dog laid waiting to greet me. 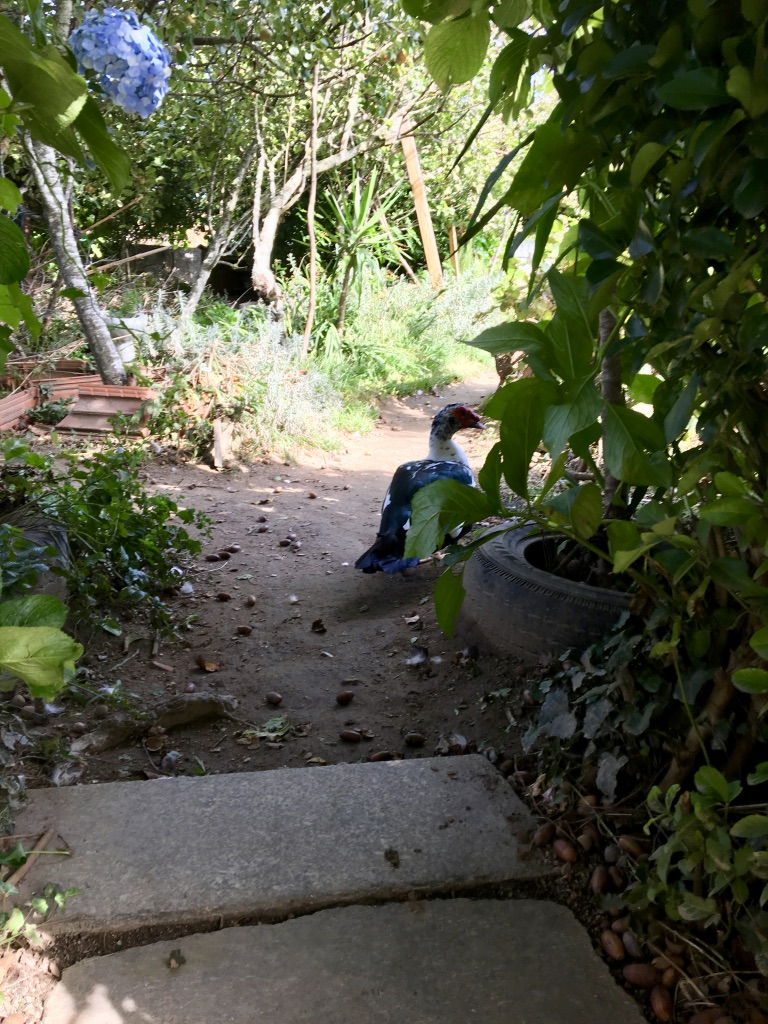 I knew Fernanda the moment I saw her. She had an aura of hosting energy that you’d expect from someone who’s built her life around welcoming weary hikers. She told me to take off my shoes and sit before worrying about settling in. She poured red wine into a clay cup and went back to directing other newcomers.

The backyard was filled with sun for drying your clothing and kittens soaking up the afternoon heat. After claiming a corner bed, I visited Sophie, who had been given the bed on the uncovered back porch, surrounded by a mosquito net. She was thrilled for the chance to have an adventure outside–and to sleep a night in silence without snores.

After a slow afternoon in the garden, Fernanda and her husband brought out plates of cheese, sausage, and bread, making sure to fill up our cups of wine whenever they were low.

Dinner came with great excitement and Fernanda–and several other women at the table–gave emotional speeches about the power of the Camino and coming together for nights like this.

We passed a pile of steaming stew down the table from person to person. I met another new friend from India named Neha and a young British couple only just out of university. They’d walked all the way from Lisbon. Our Camino family was growing.

I found Barbara having a cigarette outside by the fire after dinner while the rest of the gang was still chatting and giving sweet speeches. I needed some silence to take it all in, I told her. 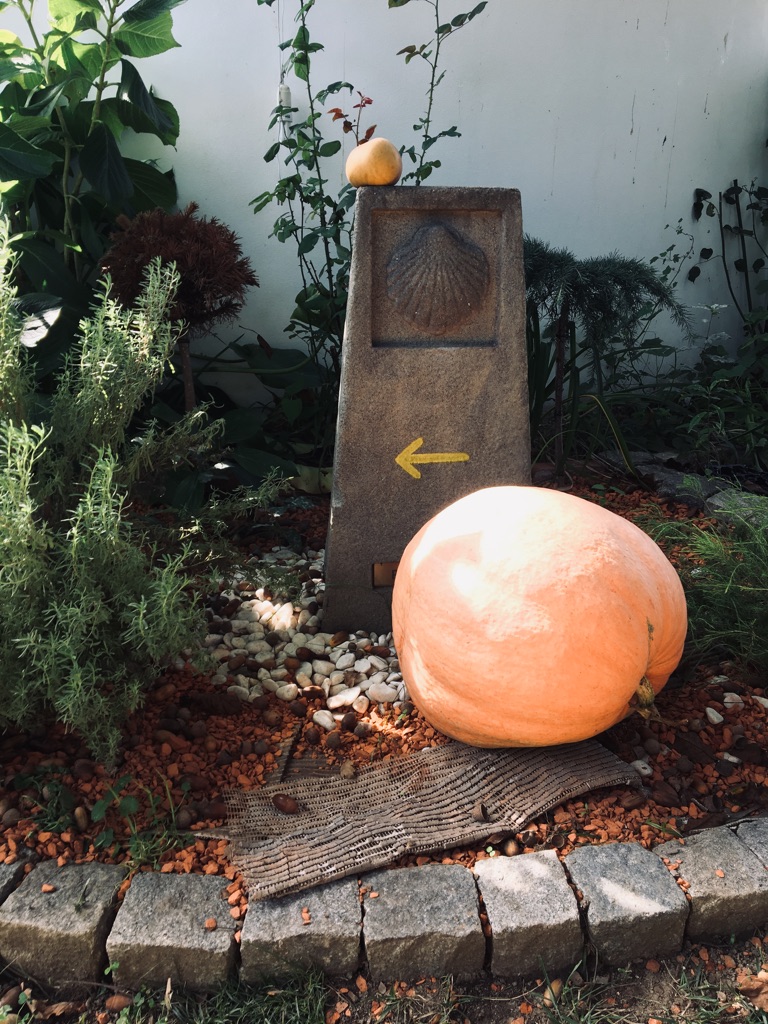 It was growing cold outside. The fall was definitely upon us, and the further north we walked, the more we were likely to hit the autumn rains. I didn’t realize that the next time I felt the warmth of spring, we’d be in a pandemic. Everything was covered in dew, from the grass to our hanging clothing, which I hoped would be dry by morning.

Where was I? I wondered. How did I get so far from my warm bed in Manhattan? The laughter from inside grew louder and a kitten snuggled up by my feet.

Last night, I sat on my unfinished roof with the pigeons, staring downtown from our apartment building on 80th Street. Even though we see an occasional friend now and then–with masks, outside–we couldn’t be further from Fernanda’s. A long table in a stranger’s home, a family meal being passed down the line of smiling faces, a room full of snoring hikers.

And yet, last night, for the first time since June, a small handful of people began cheering at 7pm. NYC did this consistently since the pandemic started here, but it naturally fizzled out after three months. Last night, however, when I happened to be up on the roof feeling lonely and sorry for myself, someone cheered out of the blue. And then another person cheered. And then someone else banged on a pot for a few seconds. And so, I cheered back, and started to cry a bit in joy.

The whole ordeal lasted just a few moments, but it was a reminder that we’re all still here, waiting to be together again around a long table. Fernanda’s table, in particular, will still be there when the world heals.

2 thoughts on “The Road to Fernanda’s”