Today is the fifth anniversary of meeting my incredible husband Ben.  Just before we moved further into the suburbs, I was riding the N train back from visiting a friend in Astoria (where Ben and I first lived together) and thought about the stories connected to each station.  The N line, the Path, and now NJ transit to Montclair tells the story of our relationship.  So here is our subway map- from Astoria to Montclair…

Ditmars Blvd: Where Ben lived when we first met.  I would get to this station late at night when he was done with his show.  At this hour, the bakeries were always baking bread.  I will always connect that smell to those magical months where he was one of my only friends in the city, and Astoria was just for us. 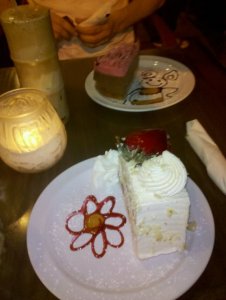 From Martha’s Country Bakery in 2010, our favorite date spot off Ditmars.

Astoria Blvd: Where we had our first apartment, and man was it a terrible one.  I choose to remember it fondly because it was our first, but there will always be the story of our “awful first apartment off the tri-borough bridge that was covered in mold”  It is also home of the Astoria Beer Garden, where Ben and I went for his 30th birthday and the bouncer taught him how to say happy birthday is 5 languages.

30th Ave:  My first apartment.  When I chose it, I sat down in my parents’ house and realized that it was 11 blocks from Ben’s apartment, perfectly walkable on a pretty summer night.

Broadway: Right off of this stop is a Starbucks where Ben and I applied for our first apartment together.  We scraped up every dollar we could find to pay that security deposit and prayed that no one would find out we were actually actors (and not whatever full-time job we made up).

36th Ave and 39th Ave:  We sailed through these stops and always said “I bet these neighborhoods will be expensive some day, it’s that funny?”  A bedroom is now about double of what I paid in 2010.

Queensboro Plaza:  The tradition of texting “My train!” began.  When we came above ground, Ben would text me that his train was coming.  I knew that if I waited four minutes after the text, I could get to 30th Ave and jump on Ben’s train heading to Ditmars.  He would often go in the front car so I could find him.  To this day we still text that when we’re close, that the other one can listen for the train going by.

59th and Lexington:  This station always reminds me of coming back from the first Steelers bar I even went to with Ben.  I was confused by the sunlight after being in a dark bar on a Sunday for four hours.  And I realized then that I should probably learn about what the heck in going on in a football game.  It eventually caught on…Go Steelers.  (If you change trains at this station, you can take it to where we first met) 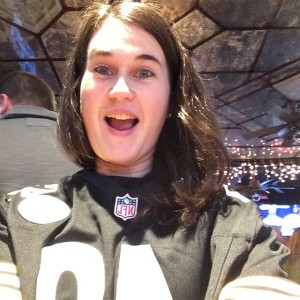 5th and 59th Street:  On our second anniversary, Ben and I boated around Central Park Lake.  This was after he bought me shoes because mine were falling apart.  We hopped on the train to get ready to go out that night.  It is how I hope to always remember Central Park.  (From here you can also walk to where Ben proposed) 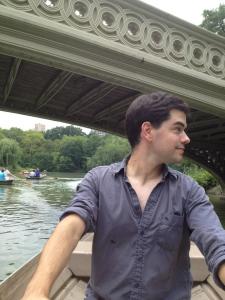 57th Street 7th Ave: This is where Ben once comforted me after our train stalled between stations.  It was one of those weeks where my patience with NYC had run out.  I was exhausted and claustrophobic and just needed to get home.  Ben and I were one of the only ones on the train and just as I was saying/crying that I felt I had no personal space in this city, the homeless man on the train began to CLIMB UNDER OUR SEAT.  Ben was there to keep me from completely losing my mind.  And is a strong man for it.

I also think that the announcement for this station is really sassy, like the lady has a sexy secret about 7th avenue.

49th Street: Early on, Ben told me this was one of his favorite stations because of the beautiful brick and because it reminded him of being in school.  I’ve appreciated the brick each time since.

42nd Street: Is it possible to have a fond memory of Times Square?  Let’s say because it’s closest to what was once was Lily O’Briens chocolate cafe in Bryant Park.  Our second date, we went there to get hot chocolate and talked in the park about Joseph Campbell for approximately three hours.

34th Street:  It’s one of my least favorite parts of the city, but it became our home-base for two and a half years when we rode the Path train.  I once had too many Manhattans and Ben bought me a very delicious chicken kabob off the street.  I told him it was the third best meal of my life.

23rd Street:  I can’t think of anything other than Trader Joe’s.  But it did feed us for a long time.  So yay Trader Joe’s!

14th Street: For a few months, Ben and I actually worked off the same stop and commuted together.  Every morning we would walk by a puppy daycare and look at the doggies playing before parting ways.

9th Street: The neighborhood where I came up with my vows:)

After drinking at Amelie…

Christopher Street: We used to have a favorite Italian Bakery off this stop but it turned into a snazzy flower store. But still..delicious.

Hoboken Station:  Texas Arizona..we will see you in the fall.

Newport Station, Jersey City:  Where Ben and I used to wander along the pier on pretty summer nights after getting ice cream.  We once watched a poor confused group of friends trying to figure out why the sun dial was broken at night….

Grove Street, Jersey City: The first station we ever visited in Jersey City.  On the walk back here we decided it would be a nice place to live.  We have shared birthdays, anniversaries, and every frozen yogurt night in between at this station.  We even decided on our wedding ceremony ritual at Roman Nose a block away.

Getting our marriage license off of Grove Street

Journal Square: This station was the bane of our existence during our time in JC, but it was the station that took us home.  During Sandy, we stood out front and fully took in how the community was trying to come together after such a terrible storm.

Harrison:  No information on this topic.  What is this station?  Is it a real thing?

Newark Penn – Newark Broad:  These will always bring me back to our Audible days.  Ben boosted my confidence enough to not only ride the light rail by myself, but also record a few audiobooks.

Walnut Street: Our new beautiful home, with the most peaceful walk I could ever ask for.  Ben still meets me though, even though our neighborhood is safe, and it is only a few blocks.

One of the nicest things though?  There’s a bakery nearby that bakes bread, and that smell always reminds me of you.

Here’s to many more train stations, many more walks home, and many many more years.

Happy Anniversary sweetie:) I love you.