I was riding back on the G train today from Park Slope reading Whole Living magazine, sipping iced coffee and soy milk from a hipster coffee shop, and carrying a bag full of craft supplies for art class next week. We’re making kites and learning about wind, the earth, and enjoying the outdoors. It will probably involve a lot of talking about self-affirmations and running in circles enjoying the wind. This is my life, I’ve become a hippie teacher.

I came across the section called “10 Thoughts” which includes little philosophical and feel-good phrases. I usually put it up in my kitchen for when I’m feeling funky and taking out my mood on the cat. But today, the 9th one really spoke to me. It said “The upside to grand failures: THEY MAKE GREAT STORIES.” Immediately I was struck with the urge to write so started scanning my brain for something I considered a “grand failure” in my life. Note: this is an incredibly depressing exercise so I wouldn’t recommend it for a writing class if you plan on teaching one.

So I steered away from the heavy things and instead thought about grades. Did I ever actually fail a class? Failed a whole bunch of tests (I think I got a 4 on a chemistry exam once), but never a class itself. The closest I ever came was a D…in 6th grade gym. How does one get a D in 6th grade gym you ask? By not bringing your gym clothes, and therefore not taking the class at all. Really thinking about it though, there was much more to the gym class saga than me being forgetful.

The Beginning of the Gym Class Curse

Sixth grade was my first year in Vernon, and therefore, in Public school. Though living in Vernon was heaven compared to Plainfield, before this I was never particularly bothered by what I just thought as a bizarre class. The most I remember was an angry teacher who clearly hated his job from my elementary school that we called Kram to piss him off (his first name, Mark, backwards). My sister’s class got the record for most people kicked off the court by intentionally swinging their field hockey sticks over their heads at the same time. So before 6th grade, gym class seemed pretty silly to me.

Public school changed things a bit. First off, sixth grade was the year I discovered I had legs. Not in a “oh boys are looking at me” kind of way, but literally in a “I have two limbs coming out of the bottom of my torso and I don’t know what to do with them” kind of way. I was supposed to shave them, walk with them, and apparently try to play an odd myriad of sports with them against my classmates. I was lucky if they even moved in the direction I asked them to go. So gym class seemed like the last place for me. Maybe forgetting my gym clothes was intentional somewhere in my subconscious or maybe I had other things on my mind, either way, I know I hated it.

My teacher at the time would rip me to shreds each time I forgot them and tell me my GPA would be shot if I didn’t take gym. But I was 11, so didn’t quite know what a GPA was. And anyway, I was going to be an actor, so what do I need with gym grades? She threatened to fail me so I cried all the way home and my mom talked her into D. I think I at least muddled through the class from then on.

The following gym years of hell would include getting hit in the face with every piece of gym equipment which wasn’t fastened to the ground. These included: baseballs, volleyballs, shoes, a golf club, and most memorably…a hula hoop. The hula hoop incident was traumatic. I survived whatever humiliating high school game which involved the hula hoop just to have some meat head whip the thing across the gym…into my nose. I basically got a black eye. My gym teacher and boyfriend at the time thought it was hysterical and I was the talk of the nurses’ office. 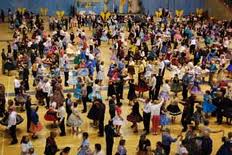 How to Torture 16 years olds: Make Them Square Dance

I’ve never been quite sure why my high school was so dedicated to an entire marking period of square dancing, but they were. I went to school in North Jersey, that though very pretty, sometimes acts like it wants to be in a different part of the country. Square dancing is what I assumed was their answer to the creative part of gym class. I hear of schools nowadays teaching yoga, pilates, or even modern dance. Nope, we did square dancing. At the beginning of class we were told to “sqaure off.” This involved scrambling (if you were an oddball like me) to find a group to be a part of. If you were an odd one out, you had the pleasure of wandering around the gym between dances and tapping someone out. This usually involved breaking up a social group that wanted to dance together, therefore making you EVEN COOLER. If as a theatre kid, you lucked out and managed to be in class with another group of theatre kids, we’d stick together and try to stay strong. Otherwise, you’d end up dancing with either the terrifying crowd that self-declared themselves as popular, the poor kid who was going through a severe adolescent sweaty phase, or even worse…the boy you were madly in love with…

Which brings me to running around the track…

If it wasn’t rhythmically choreographed to music (other than square dancing), physical exertion and I didn’t really get along until the end of college. So running in endless circles for a grade always confused me. Running for me usually made my double over and start wheezing, so yeah, wasn’t my jam. Track days were always something like “A= 6 laps, B=5 laps…” and so on. I knew five or six wasn’t going to happen so I decided walking with my girlfriends and discussing the woes of being a teenager was much more important. I had a teacher tell me my grade were slipping because I was “hanging around the wrong girls.” (10 points for great teaching skills!) What she didn’t know was that the things we talked about not only helped me mentally survive high school, but also taught me a lot of what I knew about dating, boys, and surviving crazy family catastrophes. Thanks Allie, if you’re reading this, you taught me a lot and made wandering in circles much more productive and educational:)

So though gym never particularly involved any “physical education,” it was a character building activity. I knew one day I’d look back, maybe while walking across Spain, and I’d think “that bitter gym teacher was wrong, I’m NOT lazy.” I am also no longer afraid of my legs, or square dancing if the opportunity presented itself. To come full circle, I’ve even become a teacher, one who will never make a kid do something that makes them feel even more physically uncomfortable that you already do at that age.

So take that gym class, I win.