Camino Day 2: Better than the Pyrenees 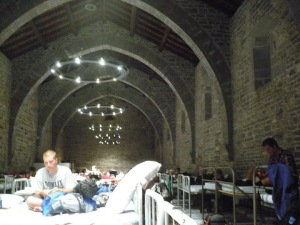 We were awoken the next morning by what I thought were church bells, but when the choir came in, I was a bit more skeptical.  The nuns of the hostel in Roncesvalles used a tape recording of choral music to get you out of bed; a trustworthy tactic to jolt the  200 hikers out of the largest one-room hostel on our trip.  It was a converted church lined with about 8 rows of bunk beds.  What should have been loud and noisy, was more like a fun peaceful summer camp.  And in spite of the impressive musical arrangement of snores during the night, I slept quite soundly.  I don’t think my body would have let me done anything else after the day before.

Boots filled with newspaper lined the shelves by the entrance.  One rule of the hostels were that boots were removed the moment you came in, who knows what you picked up during the day, and hey, you smell.  We knew it.  Going outside that morning was a gift.  The sun was shining and the humidity had broken because of the rain the day before.  We had made it to Spain and the sun came with it.  At the beginning of the road was a highway sign, possibly placed there to taunt the hikers.  It read “Santiago de Compostela: 790.”  This is one of those numbers too difficult to process when you know you have five weeks of hiking ahead.  So you don’t.  And you just start walking.

Many people have asked me what type of roads we walked on.  The answer: all types!  Today was a good testament to that.  The day before we were mainly on dirt paths through the mountains and a few muddy, cow-covered fields.  Today we started off on a highway and followed our first yellow and blue markers into the woods.  The province of Navarra is magical.  No, literally.  Its history contains stories of the Basque witch trials.  Signs of the area’s rich religious past and struggle are marked by occasional unique statues and ancient crosses.  Posters and slogans are painted on the buildings, depicting the Basque countries great pride.

This was also the first time I realized how new I was at this “Camino thing.”  An older man who zoomed by us was doing the hike for the 7th time.  He was in his 70s.  Another couple from France, who we would later become close with, had begun hiking right from their doorstep in Lourdes.  This was their 3rd week hiking.  Look at us, thinking we’re so hot.  Hikers flew by us, leaving us in the dust.  Hiking anxiety was something we didn’t deal with the day before since the main goal was to not freeze to death.  The motto of the day became, “go at your own pace.”  At mottoes like this, I would raise my arms and exclaim, “METAPHORS!”  I later said this would be the name of my book if I wrote one.  It won’t be.

I met a sweet woman named Mona and we paired up for a few hours and talked about her life as a teacher.   She had a kind face and sad eyes so I wanted to hear her story.  It was typical with all of the time we had to pair up to chat for a few hours, and then suddenly find yourself walking alone again with your own thoughts.  It was a pleasant balance most days. The weather was perfect at this point.  If there was an image I had in my mind about what the path would look like, it was this.

I forgot to mention two hikers yesterday that were a shining light to many of our Camino days.  Meet Pepe and Antonio.  I don’t remember details of their story, but each night, Antonio would pitch a tent or find a safe spot for Pepe outside his hostel.  He would sweetly sit with him and feed him dinner while many Pilgrims came to show their love for the best donkey ever.

We stopped for lunch and some odd rumors started circulating.  This was another common thing.  “Heard there are bad hostels up ahead” “Mountains up ahead I hear are rough.” “Watch out for that dragon.”  You learn to take them with a grain of salt.  The rumor today had a ring of truth to it though.  Apparently the next town up ahead was holding a festival, and so the Pilgrim hostel was closed.  Everyone was being re-routed to Zubiri, the next closest town.  This is why everyone who knew the drill was hustling.  Zubiri only had a certain amount of beds until they opened up overflow housing (more on this fine experience later).  After that filled up, you were SOL.  Some people were calling ahead and booking rooms in a local hotel to avoid having to give in a take a taxi to Pamplona (the nearest major city.)  Taking a taxi in our minds was a mortal sin, something we never had to do, but we did stop judging people for it.  Everyone has their own Camino, no need to judge.  (METAPHORS!)
It was always around the last 4 kilometers that your brain starts to play tricks on you.

Brain:  That’s nice, we need to get to Zubiri so we can get a bed.

We reached Zubiri around 4, way later than normal since we were still learning the rhythm of all this.  A line outside the main hostel had been forming for hours and it was clear that there were more people than beds.  Nonetheless, we got in line.  This is where I am remotely positive we first met Julianna from Canada and Daniel from Germany (ladies, correct me if I’m wrong.)  Julianna became one of our semi-permanent additions to our daily hike.  About our age, her story blew me away.  She had begun walking the Camino several years prior but ripped both her Achilles a few days into the hike.  Nowhere near a town, she stumbled  a MILE after realizing this.  I would go into more detail about people’s lives, but it’s really up to them to tell their stories online if they wish.  Either way, she was always a lovely reminder to A. Not give up, and B. Take our time.  She was back to do it again, this time nice and slowly.

We also met Daniel from Germany.  To this day, one the coolest people I have ever met.  He learned English while living in India, so as you can imagine, had the coolest and most unique accent.  He had a sense of humor that could turn your day around and a fountain of Buddha-worthy advice.  Daniel also walked portions of our trip with us, and always arrived when we needed a reminder that material things were unimportant.  He also made a strong point against Western medicine, but again, a story for another time.

When they began taking people into the hostel, the beds filled up rather quickly.  We were the first people to not get a bed, which was fine because at least received a sleeping pad and were directed to overflow housing next door.  This was inside an old gym of some sort.  It wasn’t anything to be desired but at least I wasn’t completely on the floor like some people.  Still, it was the start of a very rough night.  This was the first, and one of the only nights that I wouldn’t sleep after a full day of hiking.  We didn’t shower since the stalls didn’t have curtains.  By we, I mean me.  Plenty of people showered.  And I saw lots of …parts that night, belonging many people I now knew a wee bit better.  I eventually got over this.  People from France sure do like walking around in their underwear.

It was a shame that after such a beautiful day, I lay awake frustrated battling with my own mind to get some rest.  I knew I had a long walk ahead the next day into Pamplona, how would I do this without sleep?  The night dragged on and I didn’t even have the guts to get to up go to the bathroom since it was pitch dark and didn’t want to trip on anyone.  The snores echoed even more strongly in the old gym, and I was at the point where every noise bothered me.  My ankle ached, I hadn’t showered, and for the first time, I really missed home.

In tomorrow’s post I will include the angry email I wrote on day 3: the morning that tested my faith in everything.  I would learn by the end of the following day that this sleepless night would teach me a valuable lesson.  But in the moment, I hated everything.

7 responses to “Camino Day 2: Better than the Pyrenees”