Due to a restful night of sleep, thanks to some magical Spanish wine, we woke up feeling refreshed.  Unfortunately our muscles had taken a solid hit from the day before.  My ankle was aching and poor Courtney’s foot was oddly swelling.  After hearing Juliana’s cautionary tale, we decided it was something to keep an eye on.

Back in St. Jean, we were given several very helpful documents, including an elevation breakdown for each day.  Day 4 had a big vertical line in the middle of it, telling us there was a mountain to be climbed.  Nothing even close to the height Pyrenees, whose line nearly reached the top of the graph.  This climb looked like a steep and quick incline followed by a possibly treacherous walk right back down.  We were told it was a tough one, but once you got past the mountain, the rest of the day was easy.

When we left the hostel, we still had a good portion of Pamplona to walk through.  But after leaving the center of the city, we entered the business neighborhood that was filled with the bustle of rush hour.  For the first tome on the trip, I was reminded that the rest of the world was going on without us.  Men and women in business suits rushing and grabbing their coffee just like I did this morning in Manhattan.  We could see into a lot of the offices as we passed by, and many people were settling into their cubicle for the day.  How varied one day is for each person.  They were having another calm Monday with their coworkers and families, and I would be hiking over the mountain a few miles away, one they probably drove over to leave the area each day.  It was all pretty strange. 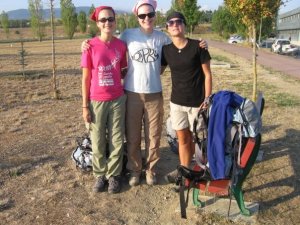 We got truckin’ a little late since we decided to take it easy on our aching bones and have a nice breakfast.  When we were about to leave Pamplona, we took this picture.  You can tell we’re all not feeling so hot and that the sun was already starting to press down early in the morning.  After cresting the next hill, we reached a small village where Courtney bought a wrap for her foot and we went hunting for a bathroom.  Here’s the thing about Spain.  There don’t seem to be a lot of bathrooms.  It became as important to plan out our pace for meals as it did for finding one.  Men have it easier (though we did learn of some crafty ways women figured things out.  Yikes), but even for them there was trouble.  Long stretches of land without even a tree made it, well…not fun.  Enough about that.

Coming down from the village, we got our first sight of the mountains ahead of us.  They were adorned with windmills, generating energy all over Spain, and creating quite a pretty sight.   These windmills were a staple on our horizon most of the hike.  At the base of the hill, we took a rest and then slowly began the hot climb.  This was tough on injured feet.  Strange winding paths, to cut the steepness of the climb, and small shrubby brush.  Every time your stubbed your toes on a small bush, a stream of obscenities flew out of your mouth like an angry trucker.

Voices in my head

No, I’m not completely insane.  It’s important to mention that since we started walking, I had this odd side effect. I have always had a natural narration in my head while experiencing something awe inspiring, it’s probably the reason I love to write.  But for this trip, the “voice” was often a character from a movie.  This ranged from Diane Lane in Under the Tuscan Sun to Tom Hanks in Forest Gump.  Whenever it rained, we recited, “We been through every kind of rain there is. Little bitty stingin’ rain… and big ol’ fat rain. Rain that flew in sideways. And sometimes rain even seemed to come straight up from underneath. Shoot, it even rained at night…”  For some reason these voices helped us laugh on the crappy days.  It was like my brain couldn’t process what I was doing and felt safer thinking I was watching a movie.  A movie that caused really sore feet. 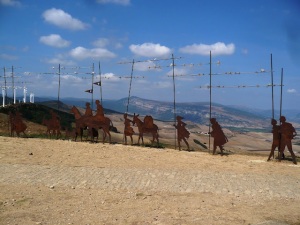 When we reached the top of the mountain, our bodies were angry but we were greeted with a nice surprise.  A famous monument had been built depicting the pilgrims through the ages.  It was a lovely place to rest, take pictures, see how far you came, go to the BATHROOM,  and prepare to walk back down.  Our next town was Uterga, a few Kilometers away from the base of the mountain.  After that, it was quite a hike to Puenta la Reina, our final destination for the day.  But we were hurtin’ especially Courtney.  And someone who knew something about feet said it looked like she had a bruised bone.

We started our trek down and became pretty silent with each other.  The nature of the terrain brought snakes to mind so I was mainly concerned with listening for rattles.  I have no clue if there are rattle snakes in Spain, but I wasn’t going to mess around just in case.  We finally arrived in Uterga where we sat to eat and weigh our options.  Walking all the way to the next town was not an option.  We would risk hurting ourselves even more.  But the hostel in Uterga was small and already full.  Taxi came to mind.  We were moments to calling one, moments to either meeting Courtney in the next town and trying to press on, or all just giving up on our vow to walk the whole thing.  We asked for the phone when the bartender said, “Wait, if you pay 10 Euro each, I have an attic.  You can sleep there.”  We were THRILLED.

We decided to cut the day short and use day 5 to only walk to Puenta La Reina so we could rest there too.  It was a great decision.  We set up our things in a small annex at the top of the house, and took a long nap.  The room was magical.  The roof slanted down, making it feel like we were in a fun attic having a sleepover.

When we woke up, we had a delicious dinner downstairs and then took our spots at the outdoor bar in front.  We didn’t have to get up early for the first time of the trip, so we were going to indulge a bit.  We were preparing for our first Spanish wine hangover.  What a beautiful night.  A few drinks helped me relax and reconnect with why we were here.  This secluded town allowed every star to appear clearly in the sky that night and the magic of the Camino took us over.  I came back to the struggle I had the day before with religion.  I still didn’t understand how this was all connected to Catholicism for me, but there was no doubt something profound existed on these roads.  I was sleeping in someone’s attic.  Strangers welcomed me into their home.  All my stuff was upstairs and I never worried about being robbed.  All of these adults from all of the world had the same goal we did.   And here we were.  We hit pause on our lives and decided to take the time to find something larger than ourselves and our reality.  What’s more spiritual than that?