I have holes in my shoes: Financial and Mental Priorities 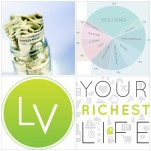 Yesterday I attended an amazing event for the company I’ve mentioned a bunch  of times on here, Learnvest.   It is a financial planning site primarily geared towards women.  I love it.  It’s open-minded, practical, and a lot of the articles apply to artsy people in my situation.  So when I headed out yesterday to meet Christina, I was in a great mood.

Rain + Shoe Death
Then the day fought back.  After having one of those “why are there so many crazy people out, it must be the moon!” types of commutes, I got off the train at 14th street to find it was raining.  Fine, I had rain stuff on, not gonna bring me down.  But then I quickly realized that I had a bigger problem, there was a hole in my shoe.  I had actually worn my crappy $20 black flats enough time to split the sole up the middle.  With every step, my foot filled with water.  I was wearing wool tights (ones I had also bought at a dollar store) and the water made its determined journey up my leg.  So I thought, enough is enough, buy a new pair of shoes, Ginny.  I went into “crap-o knock off payless shoes” on 14th and the woman happily told me there was some sale if I bought two.  At my last wits,  I told her my sob story of going to a fancy event with a hole in show so I only needed one pair.  She fairly looked at me like I was a crazy lady and moved on to someone else.

And that’s when it hit me.  I couldn’t get myself to buy a pair of shoes.  I couldn’t do it.  I found every excuse in my brain to talk myself out of spending the money when I needed it somewhere else.  To top it off, I got a call from a casting agency I thought I was working for next week telling me they moved the shoot to when I was unable to work this weekend.  So while debating the shitty shoes, my income dropped.  I left the shoe store.  There are worse things than wet feet. 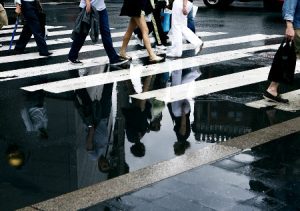 I got to Union Square to meet Christina and froze when I saw the puddle ridden square, realizing that this was a landmine for wetter feet.  So I puddle hopped like a crazy person until I reached the north side.  Luckily Christina was there, who is always a force of nature at setting my sanity straight again.

Why the long anecdote? I don’t know if I’m alone in this, but when something random like this gets in my way, my brain does this:

-I have a hole in my shoe, I didn’t notice a hole in my shoe?, don’t buy new shoes- that’s not in my budget!, I don’t have enough income, I should find more income, I’m not working hard enough, I’m not acting, I will never be an actor, I shouldn’t be in New York City, I should move home and crawl into bed, BLAAAAHHH!!!

All over a damn shoe.

Comparisons lead to too much wine

By the time we reached the event, my blood pressure had dropped and my foot had nearly dried.  Christina and I got our bearings and grabbed a glass of wine.  We even started chatting with some really great people and an editor I recently had the honor or writing an article for.  But as the financial seminars began, and the wine kicked in, all I could think about was the damn hole in my shoe.  I realized that many of the discussions were understandably geared toward people with dependable incomes.  How to plan for retirement, where to invest your money in the stock market, and when to splurge on that expensive personal item.  I started getting grumpy.  This was not all they were saying, but this is all I was hearing.  I can’t afford new shoes and all these well-dressed women around me could.  And they had insurance.  Brain!  Hush!

There I was comparing myself to hundreds of women I didn’t know anything about.  I was at a financial event that particularly helped you deal with the very issue I was battling over, and I was bitching away in my brain over it.

My breakthrough?  It all comes down to priorities.  I was unable to buy a new pair of shoes because fashion has always been on one of the lowest rungs for me.  I will wear a piece of clothing until I can’t sew it back together anymore.  Or in the case of shoes, electrical tape!  I had a credit card I could have swiped and gotten a new pair, but I wouldn’t have felt any better.   My priorities at the moment are groceries, paying my bills, and having some extra money to be social every now and then.  I chose to be an actor because that makes me happier than doing anything else in the world, and cutting down what I spend my money on comes along with it.  That doesn’t need to be any one else’ priority.  Other people are not more or less successful than us because they are wearing nicer clothing, planning their retirement, or traveling around the world.  They just have different priorities and are on different paths.  I’m doing what I need to do right now, and it’s the same for them.

The moment I realized this, it was like a weight was lifted.  I looked around at the room of women listening to Gail Simmons (from Top Chef!  I was in Food Network heaven!) and guessed at least half of them has had a similar crisis.  We are taught how important it is to present ourselves as confident and put together, but in the process, tend to hide what makes us feel most vulnerable and frustrated.  I think these things are important to connect with one another on.

The idea of the conference was partially to open up these discussions.  But it makes sense that it will take some time for people to fully feel comfortable admitting their financial insecurities.  The amount of money we make and the amount we spend whatever the heck we want, has nothing to do with anyone else’ priorities than your own.  In the end, we’re all doing our best to figure the same things out.

If you’ve made it to the end of this wacky post, I’m sure it’s clear that I’ve been having an attack of confidence lately.  It has a lot to do with fully focusing on acting this fall.  This leaves me at home a lot doing work on my own and searching for auditions.  It can wear on your brain a tad.

But if you have any other thoughts about this comparison issue, even outside of the subject of women, money, or career…let ‘er rip!!  I think it’s great to hear that you’re not alone in feeling this way from time to time, especially when living in a crowded city surrounded by so many different personalities.

I will happily keep up the discussion in the comment section:)  Thanks for reading as always.

2 responses to “I have holes in my shoes: Financial and Mental Priorities”