I am temping at reception for the first time in several months today, and I came across an old post from last year at this time in my Google Drive.  Often when I sit at these desks, I rattle off my train of thought into an old document I’ve had since the beginning of my temping adventures.

What I found was very exciting though.  It was something I wrote when I was in the happiest of mindsets about New Year’s Resolutions for 2013.  This year I have been having a hard time wrapping my head around how to move in a better direction.  I know what I hope to happen, and I know what I’m frustrated with.  But nothing on that list is a tangible task I can complete.  I can’t just decide to “get cast in more things,” as nice as that would be.  Luckily, my writing from last year talks about simply changing my mindset in 2013.  The goal was to focus more on the present instead of constantly worrying about what’s down the line or behind me.  Thanks, past brain!  That did help me last year, and it comes back around to help me tackle this year’s resolution as well.

So here is my breakdown, as a message from my past self, to help you if you are also stuck with this year’s resolution.

Start with your brain

It’s very easy to say your want to be thinner, more in shape, more confident, more determined, or more organized in the new year.  But if these things were that easy to change, wouldn’t we have made that “decision” ages ago?  If changing for the better is as simple as a one-time change of heart, why hasn’t every past resolution worked?

There are many passionate list makers circulating Facebook right now that say it’s as easy as “choosing to have a good day,” and I honestly feel like that’s crap.  I don’t think it’s completely false either, and I understand the intention behind it.  But it’s incomplete. In my mind, these phrases and lists of people standing on mountains doing yoga always made me feel like I am doing something wrong.  So for myself, I have simply chosen a mantra that will send my mind in a new direction on its own damn watch.  No more pressure or decisions to make epic changes or promises beyond your control.  After gently saying a mantra to yourself every morning, one day you may just wake up and feel that way.  And once you’re feeling more comfortable in your own skin, I believe the obvious goals you’ve been chasing after will fall into place naturally.

Cool it with the Facebookin’

On a day when I feeling particular inadequate in the acting world, I came across the Annoying Actor Friend Twitter.  Thank the Heavens for good ol’ cynicism!  Here I was thinking I was a Grinch getting frustrated by theatrical success over shares, and behold!  There is an entire hysterical Twitter Feed dedicated to it.  Check it out for a good laugh: https://twitter.com/Actor_Friend

My point and the point of Twitters like this is not to say that people should keep great news to themselves and let all the grumps win the grumpy war.  It’s about the fact that social media can become a place to either brag or compare yourself to others from the privacy of your own home.  You may not have the balls to run up to a group of friends and yell, “I feel so blessed to have my fourth callback this week, and damn, is this theatre thing easy!”…but people seem to have the balls to do it online.  Many people I know succeed at NOT doing this, and I am very happy when I hear their announcements.   There are plenty of ways to write about your victories without being a douche, or by not trying to hide it by declaring how humble you are.  #sohumble #reallyhardtobethispretty

If you are like me, you’re not very good at letting these comments slide off your back.  So use the magical power of Unfollow!  There’s no shame.  You have the power to decide what messages are entering your brain and whether they’re healthy for you or not.  If you’re sick of me putting up wedding updates, but all means, unfollow me!  I wouldn’t blame you for a second.

One of the most annoying trends I find with the articles  posted on Facebook are the extremes they convey.  “NEVER EAT BREAD”  “MARRIAGE IS FOR YOUR PARTNER, NOT FOR YOU” “HAPPINESS CAN ONLY BE FOUND WHEN WE DO 5 HOURS OF YOGA AND SQUATS!”  Yes, we’re all proud of you for being passionate about a topic…or a fad.  But haven’t we realized yet that the answer to all of these debates (unless they have to do with hate and prejudice, then the answer is just stop being an asshole), is a balance between the two?  Finding the balance, or “hitting the mark”, is a wonderful Buddhist concept I often keep in mind.  I feel like people are drawn to these extremes because we’re all looking for some secret or shocking discovery that will change us.  Extreme opinions may get more attention, but I don’t see what they’re doing for people other than starting never-ending debates which never reach an answer.  Cool it.  It is possible that both parties are right.

Reflect on how awesome you are 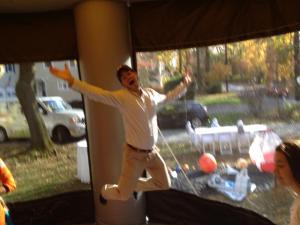 Yes, I just ranted about people who brag on Facebook, but I am by no means saying not to be proud and grateful for your accomplishments.  I am the first person to look back on a year an immediately focus on all the things I didn’t do.  Stop that, brain!  Unfair and rude.  If you’re not on Broadway (or at the top of whatever industry you’re in), okay fine!  Maybe you found a new great job in the meantime.  Or maybe you got engaged.  Or met new friends.  Or moved to a new great apartment or a new city!  Maybe you ran a race for the first time in your life!  Or just simply felt better than you did in 2012.  Or hell, maybe you felt worse but here you are standing on two feet in the new year.  Your career, love life, financial situation, and search for the magical mysteries of the universe are not all going to hit their pinnacle all at once.  If they did, how would we process enjoying all of them?  And where would we go from there?  Look at what you did, and move on, because after all….

You don’t have a time machine

My friend Claire often tells me that regretting a way I felt or acted in the past is silly, because in the moment, that’s just what I needed to do.  It would be like messing up in an audition and having your future-self barge through the door and yell, “Stop screwing up!”  Not helpful.  OR if you hopped in your time machine and went to July to tell yourself to really get going on those sit-ups.  You don’t know what will be going on then, so setting unrealistic goals for yourself or feeling guilty about your past is unrealistic and frustrating.  Right now, if you can get yourself out the door and run, then rock it out.  But if you feel like writing, or cooking, or watching 5 episodes of Downtown Abbey, then give yourself a break and do what’s right for you.  With this space and relief of pressure, I have found I am much more likely to choose completing something helpful and creative over eating a bag of corn chips and watching Toddlers and Tiaras.  Long story short: too much constant obsession with a goal = burning out.  Stress = eating a tub of vanilla icing.

So what was my resolution???

As I said before, I picked a mantra and I’m gonna give it a go.  Normally I wouldn’t share something this personal, but the whole nature of the mantra tells me to get over that!  I also feel I may not be completely alone in relating to this one.  My mantra of 2014 is that I deserve to have an opinion and that what I have to say is important.  No, I’m not setting up shop in Union Square and yelling motivational statements, I’ll keep those here.  But I shied away from this blog for almost a year and I couldn’t figure out why until recently.  Between planning a wedding and suddenly having the opportunity to shape my acting career, I am constantly in the process of making a decision or put my dignity on the line at an audition.  And I found it a lot easier to stay quiet and blend in at my auditions and then go on my merry way and eat an after-audition cupcake.  I was content and comfortable, and honestly, overwhelmed with the amount of changes that came in 2013- to the point that I started to feel undeserving of them.   It wasn’t until I got up one morning and made breakfast did I get the urge to share a recipe, or anything for that matter, with you here on my blog that I started to come out of my shell again.

I am not expecting that this mantra will get me cast in every show this side of the Mississippi or that I will suddenly become the next David Tutera of wedding planning.  But at least things won’t be as quiet here on the writing front because eventually I will stop caring if what I have to say is for everyone who reads it.

I have a good feeling about this year, and my superstitious side is happy to not write 13 anymore.  Let’s take things as they come and remember that though your thoughts and energies are not always going to be for everyone, you have a right to pursue what you love and feel how you feel.  On that note, I would love to hear you’re resolutions or mantras for 2014 below.  Hooray for 2013, we did it!  Now let’s keep doing it!  And be even better at it! Go team go!

2 responses to “A Resolution for Better Resolutions”