For the final 30 days of my twenties, I am writing one personal narrative a day that has impacted my life until now.  To read more about my challenge, feel free to check out the first post.

With only a few days to go in this writing challenge, I am trying my darndest not to lose steam.  After two particularly long and emotional stories, I just need to write something simple today.

You know those stories you tell as a kid–over and over and over again–because they’re the tales you save up for a super-exciting moment when everyone is listening??  Well, I had a bunch of those, and they weren’t always exciting for everyone forced to listen.  Either way, I told them a lot.  A lot, a lot.  The following was one of my go-to tales, so imagine it through the eyes of a six-year-old:

My cat Moonlight was my best childhood friend.  Completely black from head to tail, she fit the mold of any spooky Halloween sneaky creature, but couldn’t have had a friendlier disposition–a bit like the Coraline cat.  She was also sharp as a tack.  She, like most of our other cats, were indoor/outdoor kitties, and when she came inside for the night, she would immediately recount the adventures of her day through enthusiastic meows.  You could ask her questions about what happened in the outside world, she’d wait for you to finish speaking before chattering on with her “response.”  I was also convinced that she was part circus cat.  I had trained her to chase after certain toys after leaping over ottomans and under chairs.  We had a good thing going.

Earlier that year, my dad had started an infamous re-roofing project and the pile of old shingles hung out in the back of our garage for several months.  A frequent way of entertaining myself was venturing through the old grapevines my neighbors had once grown on the trellises on the side of their yard.  I would duck under and over the old rubble that piled up over the years and emerge from behind our line of sunflowers that flanked the back of the yard.

But on one particularly hot afternoon, as I passed the back of the garage, I heard a sad mewing and hissing sound coming from the pile of shingles.  I squished myself through the heavy door and delicately climbed as close as I could to the opening in the mountain of materials.  And then I saw it, it was Moonlight, somehow stuck underneath the shingles, trapped and hissing in panic.  I was devastated.  I ran to my parents inside who immediately came running.  Eventually, other neighbors came to help and my mom called the vet for advice/the message that we would run to his office as soon as she was free.

A little while later, I was told to back off, since animals in distress can become angry and lash out when they’re hurt or in danger.  So I dragged myself inside, defeated.

I perched myself on the edge of the dining room radiator–it had one of those flat metal covers, so I often sat there when I needed a spot to myself. I put my head in my hands and heard the hollering outside.  It didn’t sound like any progress was being made.  Just as I closed my eyes and dropped my forehead further into my palms, I felt a slick, warm cat head bounce off my shoulder.  The comforting kitty purred for a moment, and briefly licked the side of my hand.

I looked up and scratched the top of her head.  “Thanks, Moon,” I said thankfully…my head snapped up…”MOONLIGHT!”  There before me, fit as a fiddle, was my cat Moonlight–you know, the one currently stuck in the garage.  You can imagine my mixed emotions as I realized that my cat was okay, but that some random black cat was not.  Either way, I had to go tell half the neighborhood freeing the cat from the rubble that it wasn’t who we thought it was.

This type of plot twist was too wild for my six-year-old head.  I went outside and didn’t know how to explain that Moonlight was okay, but that we had a whole other issue on our hands–that someone else’s poor cat was stuck in our garage.  Eventually, they did free to poor kitty and took her to the vet.  I was always unsure if I got the full story from my parent’s, but to my adult knowledge, the cat was a stray that needed a good deal of medical care, and came through in the end healthier than before (let’s hope that’s true!  Let’s say it is).

Moonlight however, was still at my side each morning as I brushed my teeth, and we continued to work on our circus act.  For years after that, we were the lookout family for the strays of the area.  When people scoff at this, I always ask, “What were we supposed to do?”  We found homes for families of kittens, took in a cat with one ear, and even had an opossum following us around for some time.  His name was Petey.  A neighbor’s dog–who they barely fed and was often left wandering around the town–frequently enjoyed my mom’s leftover meatballs from dinner.  The cat that would eventually take Moon’s place when she passed away at a ripe-old age, was a great, white goofy creature name Teddy, that climbed up our screen door during the great snow storm of 96.  Again, what were we supposed to do? Leave him in the snow drifts?  And either way, I got a new cat buddy.

As I’m sure you’ve guessed, I was surrounded by animals as a kid, and loved it.  My family’s relationship with the lost animal souls of the neighborhood may have been non-traditional, but it taught me that each creature deserves care, no matter where they came from or how they ended up on your back porch.  And I am glad for this.  Without it, we may not have these two fatties in our lives: 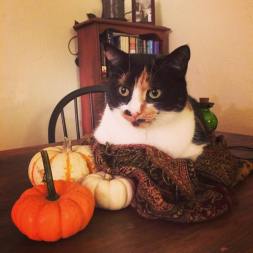