For the final 30 days of my twenties, I am writing one personal narrative a day that has impacted my life until now.  To read more about my challenge, feel free to check out the first post.

With only one week left in this challenge,  I figured it was a good time to tackle the bigger stories, the ones that shifted the course of my 20’s, and really, as luck would have it, my life.  I’ve written about this story before–the night Ben and I met–but never in complete detail.  SO here we go.

I almost didn’t accept the birthday party invitation from Jenn, a friend from college who was celebrating her birthday on the Lower East Side.  Nothing against Jenn, I would have just rather given into my trusty depression and climb back into bed with my laptop.  Yeah, that sounds like a better plan.  I was living at home at the time.  The year leading up to that summer left me in a rough spot.  I graduated college, hiked the Camino de Santiago, went through a vicious breakup three days after finishing the hike, worked in a job with a bully by my side for four months, and then found myself curled up in bed back in North Jersey for several months.  It was like a floodgate of emotional issues, kept at bay for years by the structured world of formal education, released its wrath the moment I left its protection.

Invitations like this were few and far between.  And since I planned to move to NYC, I needed to at least try and become comfortable with having social life there.  Yet there were several issues–I barely had any money and I worried my mood would take a dark turn during the party.  Still, I decided to accept Jenn’s offer and she graciously extended an offer to stay with her in Astoria that night.

It was one of the hottest days of July–July 23rd to be exact–and the only thing I could bare putting on my body that afternoon was a small sundress given to me by my friend Claire years earlier.  I stressed all afternoon about not looking like a weirdo, especially since I knew my ex, and many of his group, may be there that night.  Why I was putting myself through this, I did not know.  I just hoped there would be enough other people there that I could manage to have a good time.

After dropping my things off at Jenn’s, we stepped out into the humid night when a dramatic crack of thunder ripped through the air, sending a deluge of water through the streets.  It was a comical storm really, you had to laugh.  Because of this however, we took a cab–a luxury beyond my means at that time, you can be sure of that.  I noticed during our drive down the east side of Manhattan that this was one of those black cars that didn’t take cards–it’s wild how clueless you feel when you look back on your early-NYC self.  We arrived at the bar and I handed over every dollar I had brought for the evening.  I had money in my checking account, but not a whole lot.  So yeah, this should be an interesting evening.

We ducked through the dwindling rain as we arrived at Bua bar, a small wooden spot off of St. Marks.  (Fun fact: Bua, it turns out, is one of Ben’s family names going several generations back.)  All my obsessing about my hair and clothes were pointless now that I had been caught in a rainstorm–and yet with the humidity broken, it was finally possible to breathe the air.  A long picnic-like table was reserved in the middle of the room and 10 or so friends spread across the benches, ex included.  I sat in a neutral spot, somewhere in the middle between familiar faces and new theatre folk.  This city wasn’t making it easy to start fresh, but damnit, I was going to try.  So I went searching for alcohol.

As I nudged my way up to the bar, I handed over my card (with a mysterious amount of money left on it) and asked for a drink, “$20 minimum on cards.  You have to leave it open,” the bartended barked.  Lord, I think I had like $28 on the card in total.  So, yeah, what was my choice?  He was already pouring the drink.  “Great!” I said, and grabbed my beverage.

As the night went on, I tried my best to come out of my shell.  Six years later, I still hate small talk, but at least now I have something to talk about.  If someone had asked me about myself at the time, what was I supposed to say?  “I’ve been living at home after a mini-breakdown and I broke up with that guy–right over there–several months ago, and I feel generally small and panicked about being here?”  Yeah, so I was nailing this social thing by keeping my mouth shut.

And then the crowd parted and a new group of friends arrived with a  flourish and a holler.  I wish I could say that meeting Ben was like that moment in the ballroom in Romeo and Juliet, but to be honest, I was more focused on my friend Jonathan who had arrived with the group–because Jonathan did fantastic magic tricks, and only a half drink in, this is what I decided I needed in my life at that moment.  I believe I said something like, “Jonathan!  Magic tricks!”  Without a beat, he pulled a deck of cards from his pocket and said, “Oh…like theeeese magic tricks?”

Jonathan, Ben, his friend Dave, and I took over the center of the table. And the best part?  No one asked me small-talk questions.  I was laughing and goofing off in a matter of minutes–so loudly that we were getting looks from the other parts of the table.  I felt like an old group of friends had come to rescue me from my own awkward and self-deprecating brain.  Most importantly, I had no interest in meeting any guys that night.  So there was no pressure when I sat down to goof off with these three fun dudes.

Ben and I still laugh about a misunderstanding that evening.  Apparently I turned to him and said, “You have to help me finish this drink so I can get another one.”  But I didn’t explain that my card was being held hostage at the bar, which is why I needed another drink.  Ben heard, “Help me finish this drink so you can buy me one.”  Well!  Imaginary Ginny is way more forward than real-life Ginny.  Either way, he kept buying my drinks before I could put another one on my own card.  We also made several recurring jokes about how Ben was about to turn 30 and I was a whopping 23, something I worried would send him running.

As we got chatting, the puzzle pieces began to fall into place.  Ben went to my college, but graduated three years before I even arrived.  Though he had hosted an alumni event I attended as a Freshman, I have no memory of meeting him–which is probably for the best, since I was 18 at the time.  He also grew up 10 minutes from my original hometown, worked for the same woman I was working for at the time, and shared about 20 mutual friends from all parts of my life–theatre, college, childhood–it was insane.  He also told me he had been the president of the guy’s a cappella group (I was in the all-girls group), which led me to texting my friends the message, “The good news is I met a nice guy in NYC.  The bad news is that he was in MadAve. How did I pull this off?”  Luckily, it did not deter us from getting married.

Anyway, as the bar began to close up, and I made my drink minimum, we stumbled outside with the final crowd and headed in the direction of pizza.  Our friend Christian followed alongside us playing a ukulele.  So here we were, a merry band of drunkies, marching and making music through the Lower East Side on a beautiful summer night. 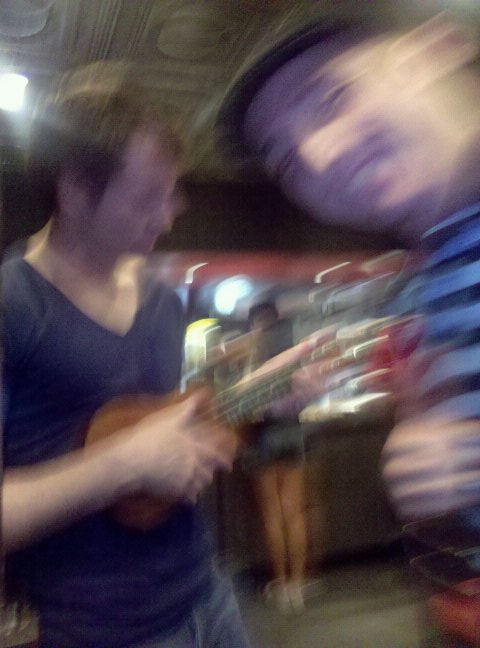 After that delightful slice, we headed for the train–it was finally time to call it a night.  Ben and I were ahead of the group talking about my trip to Spain.  I remember saying that sometimes, even when you’re standing in a foreign place, you’re still somehow shocked to see that it truly exists–not just in textbooks or the movies.  To this, he takes out the notes section of his phone and shows me that he had recently taken almost the exact same note for a writing project.  Word for word.  Well, would you look at that.

We exchanged numbers and the group said goodnight.  Without pushiness or making a big show of it, Ben gave me a simple, casual, and quick kiss, before smiling and saying he’d call soon–as if we had known each other for years, as if he was just running out to CVS for a carton of milk.  As he went his way, I walked with Jenn and her other lady friend who waited until we descended into the train to gush about “this new boy I had just met.”  Jenn gave her full-hearted approval of Ben’s character and said she’d be thrilled if she had anything to do with making that happen. We have thanked her many times, and frankly still owe her a drink.

We’ve had many drinks with the rest of that group however.  We see Dave every several months and occasionally still run into Jonathan and Christian–who are put through the task of hearing our meeting story each time.  More importantly though, I saw Ben many, many times after that.

For three months, when I still commuted from home to work at a NYC cupcake shop, Ben met me each night at Port Authority before the last bus of the evening.  We would eat the free, damaged cupcakes in an Irish pub before I had to go home.  Our third date involved sitting in Bryant Park for two hours talking about comparative religion and Joseph Campbell.  It was as if we just picked up where we had once left off–with nothing fancy, no expensive show of romance, just someone who was dependably there, ready to celebrate the beauty of NYC with me.

We were married four years later, and returned to Bua bar just after we got engaged.  The owner comped our drinks all night, which led to one of the only evenings I have partially blacked out from drinking too quickly.  I came to in a McDonald’s in Jersey City, sitting next to a very startled/equally drunk Ben.  Someday we’ll have to go back and give that another try.

I will always recognize the importance of taking a chance on an evening, no matter how much your body and anxiety tells you that it would be safer to stay inside. Thank you to all who were involved in making our meeting happen–whether you knew it or not:)