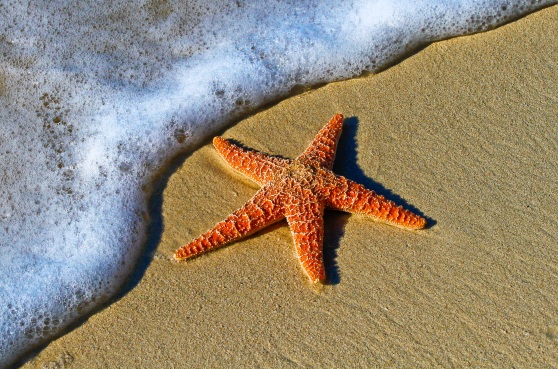 Despite the past several days throwing us some curve balls (I fell down the steps this morning–no broken bones but some pretty impressive cuts and bruises), I woke up feeling generally okay. Sure, the heat in our apartment still doesn’t work because our boiler almost blew us up last week. And sure, every day, the news reminds us that the country is crumbling.  And yet, as I tried to express in last week’s post, good things are still happening.  Maybe that’s why I can handle wiping out on my back steps, spitting toothpaste all over the room and nearly breaking my elbow.  I can take that.  Because on the bright side, I still don’t have to live through another November 8th, 2016.

After that terrible week, I felt paralyzed.  I felt that no matter what I did, nothing could fight this national disaster.  But as the days passed, and our clouds of fear slowly parted, many of us started finding very small, very subtle ways of trying to improve the days of those around us.  A coworker approached me about a Secret Santa for local low-income seniors, another friend arranged us to volunteer at a homeless shelter.  While I was there, I bumped into another friend, totally unrelated to the first arrangement, who had come just to volunteer with her husband.  Because she knew she had to do something.  Because of these, and some other random opportunities for acts of kindness, this was one of the most fulfilling holiday seasons I’ve ever experienced.

The country has seen this too.  A record-breaking donation season, a huge increase of women running for local offices, people stepping up to defend strangers, just to name a few.

But I’m not here to pat myself on the back.  I’m actually here to talk about a Camino story (surprise!).

The Camino of Animals 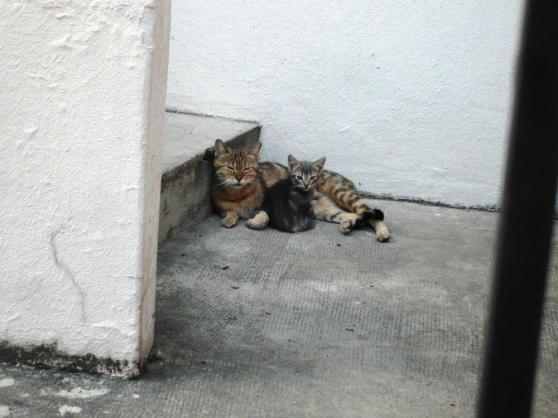 Ben and I were chatting about this phenomenon last night–people’s call to action after the election.  It’s easy to feel that small acts are too insubstantial when the headlines tell you that no matter what you do, an unstoppable sentiment of hate and intolerance has been reawakened in our country.  It’s hard to feel that leaving a larger tip on someone’s bill, or going out of your way to say something friendly to a stranger really matters at all.  Why donate one place, when there are so many groups that need our attention?

So I told him the stray animal story–something I actually hadn’t thought about in years.  Northern Spain appears to have a bit of an animal control issue.  The farther west we hiked, the more stray cats and dogs appeared in our hotels, either ready to snuggle or prepared to pounce on a bit of spare paella.

One afternoon, after bulking up on second breakfast in a small village, Claire, Courtney and I passed by a set of bushes just on the edge of town.  To my horror, I saw what I believed to be the legs of a dog that had passed away in the brush.  With deep breaths, we approached the area.  There, we found a very weak, very thin mutt, laying and barely wagging its tail in excitement at our approach.  No growls, no anger. But what on earth could we do?  We were too far off to go find dog food, all we have was a bad of Magdalenas (corn muffin-type treats) and several uncooked carrots.

So we sat down, pooled our resources, and made a little cup for the dog to drink water.  I broke up the carrots and muffins the best I could and slowly but surely, he began to munch.  I felt like we were clapping Tinker Bell back to health.  On his tiny little legs, he eventually, enthusiastically launched himself up onto all fours.  “Now what?” we thought.  Being in this town as a stray is probably was got him into this mess in the first place.

But he followed us for a few feet before passing a group of pilgrims hanging outside a local hostel.  To our relief, he trotted with new-found vigor toward the front of the crowd and was welcomed with more treats and more friendliness.  They waved and promised to look out for him. 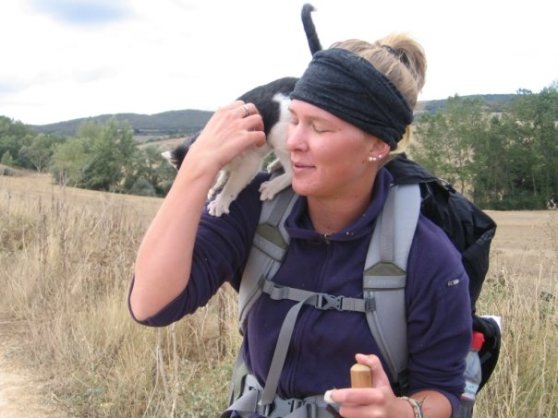 Situation 2: A week or so later, the three of us bopped along in a field of tall grass when we suddenly heard a loud set of meeeeewws running alongside of us.  Leaping from spot to spot, trying to stay above the grass, was the cat that would be later named James–appropriately for the Camino.  This little black and white ball of energy, probably only a month old, had claimed us as his people.  We were miles from any homes, and at least a few kilometers to the next village.  But he was hungry and determined to be our friend.

Cortney popped him into her zip-up, and off we went.  When we reached the hostel, James hid under her fleece as we checked in, and we smuggled him into their back, outdoor courtyard.  We bought some cat food, gave him a fine dinner, and hoped he would find a cozy place to stay out back for the night.  We didn’t exactly have a plan, but it seemed less cruel than leaving him in the brush.

As we tossed our backpacks onto our shoulders the next morning, a familiar mew mew mew screeching echoed from the next room.  With dread and worry (at getting in trouble), we rounded the corner to see James “helping” the other set of pilgrims roll up their packs and make their beds.  He threaded his way between their feet, chirping at each pat and hug he received.  At one point, a pilgrim even launched him onto his top bunk to play, pouncing and leaping as he meowed.

We descended the steps, assuming we’d get a talking-to from the hostel owner–an older woman with a stone face and the demeanor of a corporate office manager.  But just inside the back door, was a small newspaper scrap with crumbled up Magdelana’s and a little box for James to sleep in.  Our stone-faced hospitolera had found a new friend.  Before we left, we gave James a hug and sent him out to vocally greet the next day’s guests.

You are My Starfish 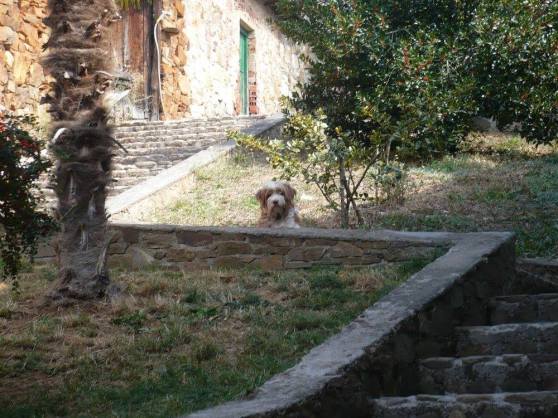 Here’s the issue this created–many people asked, why help one cat over another?  Why focus on a dog that could die the next day?  As always, we get caught in the starfish dilemma.  It’s that famous parable–a old man is walking along a beach, throwing a beached starfish into the sea, when a younger man passes.  The young man asks, “What difference can you really make when there are thousands of beached starfish.”  And as the older man throws another back into sea, he says, “It made a difference to that one.”

Many of us know that story, we get the sentiment.  But at times, especially in difficult times like this, it isn’t enough to give us comfort or drive us into action.  And so I add this small reminder to the story:  Yes, there a millions of starfish that need to be returned to the sea, but there also millions people who can do the throwing.  When paired with a belief in the goodness of humanity, doing our small part is just that–our part.  It is our personal piece of the puzzle.  That dog was our dog, James was our cat.  The things I had the opportunity to affect over the Christmas season, were my starfish.  And when there are millions people along the beach, all doing their one thing, then it feels less discouraging to get up and do something small, especially when there are so many wrongs that need to be righted.  It doesn’t mean we should do less, it means that our small actions matter when paired with the actions many.

Try to remember this the next time an opportunity to help someone falls into your lap.  No, you can’t help everyone or everything, but you aren’t supposed to.  There are billions of us taking on our “small” things, and therefore, we all have a purpose.

I hope this week is peaceful and light for everyone.  Thank you for reading!