When I was a junior in high school, my English teacher asked us to describe the first time we processed the idea of death. As was the case with most of my high school papers, I came up with a much better description of this childhood moment years after writing the paper; still, the assignment has stuck with me for years. If I wrote the paper today, I would talk about my paternal grandfather’s passing when I was ten years old.  I understood the idea of death, but I didn’t yet fully comprehended the human confusion that succeeded someone’s passing, especially when the person lost was one of those “big energies,” one of those people that changed the energy of a room, who drove the conversation and led a community in subtle ways that no one truly notices until the person is gone. 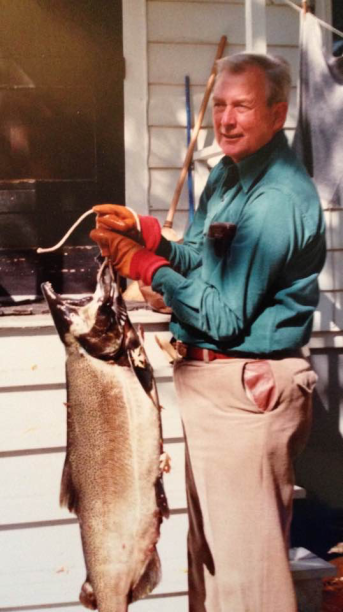 In my limited memories of him, this was my grandfather–a “big energy” kind of guy. At the funeral, my dad–who up until this point I had never seen get emotional or speak in public–told a story (Dad, I’m sorry, I’m probably going to butcher this). As he was driving out to Pennsylvania for the funeral, trying to process what he was going to say in the eulogy, he stared out into the river alongside route 80. Though most of the water was frozen, there was one circle of clean, melted water right in the center of the river. And in that hole of water, was a swan–just sitting, in his own little area of peaceful space, lit up by some sunlight. This serendipitous sight sparked a memory of when my dad and his family first walked back into their Wilkesbarre home after the flood which followed Hurricane Agnes in 1972.  He recounted that the house was nearly ruined, the living room and furniture caked in a foot of mud.  But across the kitchen, my grandfather was clearing off a space on the counter, furiously cleaning a few square feet of space. My dad, wondering if his dad had lost his head, asked why he was cleaning off such a specific space when he was surrounded by rooms of mud–what good could that one spot possibly do?  And my grandfather turned around and explained that all day, no matter how overwhelming things seemed, he would have that one clean space amidst all the mud. It was a space for the swan in the frozen river. Whether it was a well-read coincidence or a sign from my grandfather, the world reminded him of his wise energy and profound lessons, even after he was gone.

Two nights ago, my school community lost one of these people.  Tom Fleming, a local hero, nationally renowned marathon runner, and passionate fourth grade teacher, passed away suddenly during a school track meet. I learned about his passing from an automated phone call that went out to the faculty and staff. News like this sends you into shock for a few moments.  I gasped, probably yelled (I don’t really remember), and then found myself crying on the kitchen floor for the next half hour with my husband. After I calmed down, I do what I always do, I climb into my shell and watch the world process the person’s loss from behind a glass waiting room window in my brain. Maybe it’s the writer in me, but I usually shut off until I’m alone.  I don’t do well in crowds when I feel that low, instead I feel the need to just observe.

The feeling in our school right now–the feeling that something is missing, that we’re not whole–is a feeling I’m all too familiar with. In college, my theatre department lost our Chair, Joe Patenaude.  After his very sudden passing, the department was temporarily paralyzed, and then was later enlivened by his energy.  On the night of Joe’s memorial, we stood on the roof of our school’s gym during an unseasonably warm spring night and celebrated his life.  It is still one of the most memorable nights up until now.

A few years later we lost the head of the music department, Garyth Nair. And then just a few weeks ago, I learned of the sudden passing of William Donald, my summer theatre director and the former director of our high school theatre program.  All of these men were huge personalities–boisterous, goofy men at times. They pissed people off and they made people feel loved.  They told irreverent yet hilarious jokes, they toed the line in their humor.  But above all, they led.  Oddly enough, the list of people I’ve lost is primarily made up of mentors–of all ages.  And Tom was the same.

But in this case, it is first time that I had lunch with someone one day, and they were gone the next.  It’s too hard for the brain to figure out.  And so I found myself sitting on my porch yesterday–the first solo moment I had in the 24 hours since the news–and started to uncontrollably cry.  I was angry that I wouldn’t have his humor in our lives anymore, but far more angry that he was missing out on the warm spring, storm-filled day we were having. It felt like absolute, unfair bullshit.

Just then, my husband Ben came out to the porch to sit with me. “Hey look, a balloon,” he said.  I turned around to see a blue balloon caught in the backyard tree branches.  For whatever reason, it made me smile. There’s something special about balloons to children, something magical.  Maybe it’s because they float.  We talked for a while and then headed inside, and I fell soundly asleep for the first time in several days.

When I woke up, I wandered through Facebook to see how everyone was doing. A video had been posted from about 6 hours prior of Tom’s fourth grade class gathering in the local track field–to release green and blue balloons in his honor.  This spot is about a mile from my house.  It was a windy day.  I can’t help but think that my tree balloon is one of Tom’s balloons, arriving just I started to get angry at the world on my rainy porch.

Though we are aching, you can feel the energy of Tom’s spirit being celebrated in the halls today. I feel so lucky to work in a place that recognizes the power of doing so.  After the loss of men like Tom, Joe, Nair, Bill, and my grandfather, I’ve finally realized that we’re not imagining that feeling–that feeling that something is missing.  These types of people, with all their faults, are a bit like bright, blinding lights.  Even after you close your eyes, the imprint of their outline is still imbedded on the back of your eyelids.  Our job is to grab that light and make it a part of ourselves, to see the signs–in the balloons, the swans, the stormy spring days–and take them to heart.

We then have a responsibility to not only reflect this light, but learn to produce it ourselves.  And if we do pull this off, we’ll know–from their example–that our light will be spread across a community when we go, multiplying and releasing in millions of directions, hopefully inspiring others to do the same.