The Permission to Scream 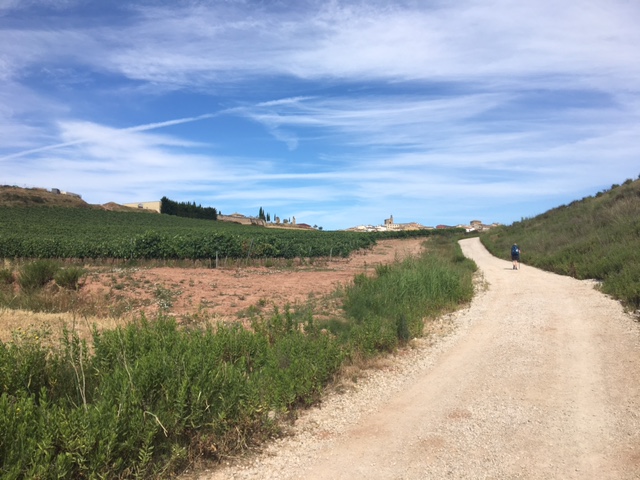 Last night, I had a dream about screaming at the top of my lungs.  In a normal situation, this would have been a nightmare. But since I am only two weeks out from Camino #2, nothing is quite normal.  My knees don’t really straighten yet, my calluses are still hideous, and more importantly, I’m having dream flashbacks to conversations from four weeks ago:

After a rather scary, 90-degree hike into Los Arcos, on what I remember to be the 4th or 5th day of hiking, Christina and I sat down to dinner with two of our favorite early Camino family members–Patrick and Steve.  Patrick–a feisty Irish guy in his 60s–was on his second Camino…that month.  He had gotten to the end of the trip a week or so prior, only to come back to the start and begin again.  His reasoning for this is currently lost in my cloud of fuzzy memories, but it doesn’t really matter for the sake of the story–and people make wilder decisions in the world of the Camino anyway.  People at home think 500 miles is insane, but in that world, we’d all made that decision, and people had come much farther. No one questions it though; no one asks “Why the hell are we all just walking in that direction?” or even, “Why don’t we stop putting our bodies through this pain?”  No one asks because the why either doesn’t matter or doesn’t change the fact that we’re there either way, trusting that we aren’t supposed to have an answer.

Anyway, dinner with Steve and Patrick.  We named Steve the patron saint of afternoon drinks. Though he was nearly a generation above us, Steve beat us by hours each day, even in the heat of that infuriating, direct-sun trudge through the open dessert before Los Arcos.  I had reached a point of heat so extreme that my sweat was colder than my skin–a creepy sensation that makes you feel like you’re sweating ice water.  Probably not ideal.  By the time we reached the town, I was ready for any structure that provided shade or produced water.  And yet without fail, Steve was already on the patio of the albergue, sipping a cold glass of white wine as we dragged ourselves in, red and panting from the heat.

Later at dinner, as Steve and Christina chatted over paella, Patrick told me–without prompting about the type of day I had just endured–that I should take the time to scream the next time I had the chance.  A weird conversation topic outside the Camino, but not here.  It was also somehow not weird that the particular day had brought with it this deep, frustrated pain that I was missing out on something crucial.  Somehow, he knew I wasn’t happy.  I wasn’t rolling in the fields and kissing the ground I walked on as I had imagined–a fact that infuriated me further.  Because ya know, I had only been talking about coming back to the hike for eight years, and here I was, feeling like I wanted to throw in the towel.  In my head, everyone around me was filled with wonder and enthusiasm.  In my eyes, they all skipped ahead of me, blister-free, discovering new things about themselves with joy and excitement, as I had on the first Camino.  But all I found this time was a deep sadness without reason.  That morning, when the rest of the bunch drank wine from an outdoor fountain, I held back tears as I watched any hope of conversation fly ahead with each group, my stretched rubber band of an Achilles holding me back at a snails pace.  Perhaps I had been wrong about coming back.  The rest of the world seemed to have the stamina, the excitement for it all, and yet here I was, barely able to keep up.  Perhaps this Camino would be about admitting defeat and going home.

Nevertheless, I made it to Los Arcos, and as usual, here I was with a beer in my hand talking to a wise stranger-turned-friend at the end of the day. “I walked through the Pyrenees with a girl about your age,” Patrick explained,”and she was furious about how much pain she was in.  So I told her to scream–at the top of her lungs!  She thought I was a loon.  But I said, ‘Just go for it!  You’re allowed to be angry!’”  He went on to tell that the girl finally gave it a go, without warning to anyone around her.  She yelled–a weird growl at first.  And then, without prompting, she yelled two more times.  “Would you believe it?” he said, “The final yell was a battle cry.”

I heard something in Patrick’s voice that I had sensed in myself since returning from the first Camino, but have been unable to explain–that feeling that perhaps I had seen a different world, seen a new part of myself, but didn’t know how to share it with anyone else.  And because of this, maybe it didn’t really ever exist, maybe I had imagined it.  I think that’s why I started this blog soon after I got home.  Because that frustration–the anger around not being able to share what it’s like to see a new, beautiful side of humanity–exceeds the pain of hiking for seven hours through the heat on a cramped Achilles muscle.

By the end of our hike, I saw that look in many faces, I saw it in the eyes of my hiking partner, and I saw in it in the eyes of a former pilgrim we ran into at the airport on our way out.  He was a man in his 50’s, traveling with his teenage daughter.  He had walked the Camino a few years before, and said hello because he heard us talking about the hike.  “Everyone there loves each other without question, even if they believe in completely different religions or come from completely different worlds.  Why doesn’t that work everywhere else?”  His eyes pleaded with us.  He had been stuck in that “sadness of knowing” as I had been since 2009.  You know it’s possible, but the why and the how feels so far away, so fleeting.

Throughout the Camino, though my inexplicable self anger and doubt continued, I never found the courage to scream. I’ve never been good at it, even on stage.  It takes a certain freedom to pull it off.

And yet, last night–in my dream–I sat on the steps of my elementary school, as everyone around me went about their business of their lives, and I just screamed.  I screamed a blood-curdling, high-pitched yell that shook the stacked concrete block walls of my Catholic school.

Since I arrived home two weeks ago, I have struggled with something more than I did last time–a  bizarre loneliness, not in literal company, but more in the ability to express what I saw on my second Camino.  This time, I didn’t see the road for the first time, I didn’t experience the difficult, relentless push of the schedule.  I knew all that was coming. Instead, I saw the challenge of allowing myself to feel terrible.  I fought against my urge to ignore the blisters and the sleepless nights.  And now I feel myself finally seeing–slowly–why I needed to have a harder Camino this time around.

Because I wasn’t called back to roll in the fields and celebrate the flowers, this time, I was brought back to scream.  And even though it was in a dream, I feel better for it.  I feel I am progressing, I feel I am finding the “why” of going back, and maybe even the “why” of going back to the road again someday.  But for now, though I can’t tell him, I appreciate Patrick for giving me the freedom to be angry in my loneliness.  I’m hoping it will help me find the words more clearly this time around.

One response to “The Permission to Scream”