Hello! in 2018, I’ve decided to start my own personal writing challenge based on “Acts of Connection,” something I hoped to further develop after hiking the Camino de Santiago. You can find the whole story here.

Toward the end of election night, when things really started to go south, Ben and I took a walk. We were in the next town over, watching the returns with a group of close friends. We headed into a nearby park, lit up by glowing, old-fashioned oil lamps–something the village of this town is known for. It was beautiful outside. Misty, but unseasonably warm. It’s always interesting how the weather refuses to reflect the state of the world.

At one point, we stopped walking, a mutual agreement without words. “I feel like the earth is in mourning.” I’ve never felt such piercing sadness–for the fate of the earth’s health, for anyone outside of the 1%, for all my friends (and those I didn’t know) that belong to any minority soon to be targeted by this administration. I mourned for those who had given into their fear, sadness and loneliness, who had been duped by this administration. I mourned for the years of healing it would take to recconect, long after this is all behind us.

This mutual pain eventually turned into loneliness. Apparently, we were outnumbered by those willing to put other’s needs before our own. At least that’s how it felt.

Eight months later, I’d find myself in a room full of pilgrims on the Camino de Santiago, singing with a group of nuns in the middle of nowhere. They asked the room, “Why did you decide to walk to the Camino?” People answered the question in all languages, from all over the world, from different backgrounds and religions.

When my turn came, I surprised myself by saying, “I needed to believe in humanity again.” The room nodded in understanding. Since I’ve returned home, I’ve continued to this search. The “real world” is often alienating, especially compared to a five-week hike built around unwavering generosity and community.

For this week’s challenge, I decided to reach out to my circles online, requesting stories from an event that I did not experience first hand. I hope to invite more guest writers throughout this upcoming year.

Though we have a long way to go, movements like The Women’s March have energized otherwise silent or disconnected individuals into a mutual movement. In fundraising, one of the hardest challenges is getting someone to donate for the very first time–the same goes with activism. Sure, these marches are just the beginning and there’s more to be done, but for many people, the marches provided a day of identity, a reminder that we can connect in world that avoids eye contact.

Some people have been asking why we march. I am not here to explain that lengthy list right now, but you can read it here. For my writing project purposes, I must celebrate this homegrown Camino energy that has come from people reconnecting through the care and service of others.

Thank you so much to everyone who took the time to massage me with both positive and not-so-positive takes on your experience. Your courage inspires me to keep moving. It heals the hurt and anger from those horrible months. And as I hoped for in my hike, it helps me continue in my journey to believe in humanity again.

I marched in NYC last year. One of the things I loved best about it was the way that it brought women from various aspects of my life together for a common cause. I felt such pride in marching alongside current and former coworkers, former students and my daughter — all amazing women I am so proud to also call friends. There was of course also a feeling of connection with everyone else marching — singing and chanting together, laughing at the best signs and posing for pictures made it feel like one big party, one where everyone was automatically friends. There was definitely a “high” that I can’t say I felt in other marches in which I’ve participated in the past — there was something about the bond among women that was special, though hard to put my finger on exactly.

Last year, I went to DC with my parents to march. I marched because I felt angry and didn’t yet know what else to do to protest the horrors that I knew would come once Trump took office. My parents taught me to be an activist early in life, so it felt right to march with them. The experience was amazing. Even today, a year later, thinking back seeing thousands and thousands of people walking together in peace lifts my spirits and reminds me that we are not alone in our anger. This year, I was going to march with them again in Philly, but decided to stay local and march with my currently community in Morristown. I marched with my friends, colleagues and some students (current and past). It was just as empowering an experience, if not more, because I knew that in my immediate circle I was not alone. I also chose to march in Morristown to send a message to my House rep – I am unhappy with his voting record and he will be replaced in November of this year. 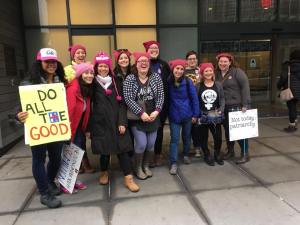 So I am part of this very close-knit mom’s group on FB. We basically experienced election night together, as we all watched coverage and talked in a thread together. And we all experienced that utter devastation when Clinton lost together. When the idea of the Women’s March came up, many of us knew that we wanted to go. A bunch of us came down from NJ and NY, some drove in from SC and MD and PA and Ohio and a Chicago and others flew from CA and WA. Many of us had never met in person before, but it was like connecting with an old friend as soon as we were together. It was so cool to experience the March with all of my friends who understood why this was important to me and had a lot of the same concerns and issues going into it. The really amazing thing is there were a lot of us, and we couldn’t all connect and meet up bc the cell service was terrible. But as a small group of us marched, towards the end of the day, we heard a yell, and looked on the sidewalk. Out of the thousands upon thousands of people at the march, there were our friends, waiting on the sidelines and taking a break. We had been looking for them but had given up, and they found us! Our community continues, of course, and I know that many of us find respite and a place of calm, away from all of the political and crazy stuff happening in the world. It was amazing to have our group IRL for the March, on a day that was already so powerful for so many – to have my mama group in person and to stand with them was just amazing.

I got up super early in the morning to cross the river and meet my bus in Manhattan that morning. My boyfriend, now my fiance, came with me. And just like that, a bus full of women that did not know each other rolled out to DC. The energy I felt was one of hope and fierce determination which was already inspiring. When I got off the bus, we marched in waves to where the speeches were being delivered. I made many friends that day and what impressed me was how many children, young girls, and even young boys were there to protest some amazing injustices. But we didn’t feel like victims. At least not from my perspective. The best I can say is that being there felt like becoming part of HUGE ocean wave of love that is about to crash into the shore and LEVEL EVERYTHING THAT WAS THERE. I came back really pumped for the future and how I could help my students become activists themselves.

I also think it’s important to note when these examples do not work for everyone. Though I would have loved to march in this or last year’s event, I had unmovable conflicts both years. But also, I tend to feel panicked in crowds. There’s a reason you’ll rarely see me at races or parades. Though I would love to get past this fear, I realize I’m not alone in it. And hearing that an event works for others can just add to the alienation. So thank you for sharing this side, Meg!

I almost didn’t make it to the 2017 Women’s March. I was recovering from a serious illness and energy was hard to come by, I was worried I wouldn’t be able to make it. I did go, and while I’m glad I did it wasn’t a particularly pleasant experience. I have trouble with crowds and the crowd was insane, I had to hold on to one of my friends for the entire experience so I could be sure I wouldn’t be swept away. The speakers were decent, Maura Healy was phenomenal, but there were way too many speakers and my ADHD and I were quickly bored. Once we started “marching” it was more of a shuffle in a disorganized route. So, the speakers were mostly boring and there were too many of them, the long stand and then the shuffle were very hard on me physically. I didn’t feel connected to anything bigger than myself. A lot of the people I went with felt connected to activism for the first time but I have a long history of activism and beyond numbers this march didn’t feel particularly special. The only thing that felt special about it was I knew that because of my physical issues it was likely to be my last march. It has been. I’m glad my last march had the kind of scope that the Women’s March had but it wasn’t enjoyable and it didn’t increase my feelings of connection. Now I’m trying to find my place in the resistance that doesn’t involve marching. Wish me luck?

I have no rules or limits on this project. If you’d like to send a story about your march experience, send away! I will keep writing posts as long as I hear from people.

(Please note, as this is my personal blogging space, that I will not approve any political posts or those speaking ill of my contributors.)