Leading up to the trip, I often dreamt of a group of hikers walking up a hill from the train station in St. Jean Pied de Port–a common starting point of the Camino Frances. It was such a distinct memory from my first Camino–a moment when the weight of my decision really set in, when I realized that I was now a part of a different group of people separate from my group back home.

When I woke up the next morning, after about four hours of very rocky sleep, I realized that I’d finally get to see that exact image later in the day.

Despite my exhaustion and not wanting to say goodbye to my friends, I was relieved to finally start heading in the direction of the Camino. So much hype for so many years. The original idea of coming back started to grow as early as 2012, just after moving to Jersey City with Ben. I believe I drunkenly shouted it outside of Barcade. Then, when I walked into Journal Square a year later and saw the horrific news on the TV screens about the train crash in Santiago, something in my head shifted fully into place.  It was time to stop putting it off. I am still one of them, and I have to be back there.

Christina and I suited up, took a clean and bright-eyed “before picture” and said goodbye to Claire and Helen. Still connected to Wifi, I took a screenshot of the map leading us to the Bordeaux train station, the first of two trains that would take us to St. Jean. Without the yellow arrows yet to guide us, I was still dependant on this thing.

I saw the first pilgrim waiting in the station and nearly lost it there and then. They have a distinct look to them–lost, friendly and carrying a scallop shell on their bag. I’m back. I’m one of them again. What a gift.

I “splurged” on a fancypants seat in first class on the first leg of our journey. Though it was only 4 Euros more than the regular seats, we made the most of it and had a fabulous time playing with the padded armrests and built-in mirrors. 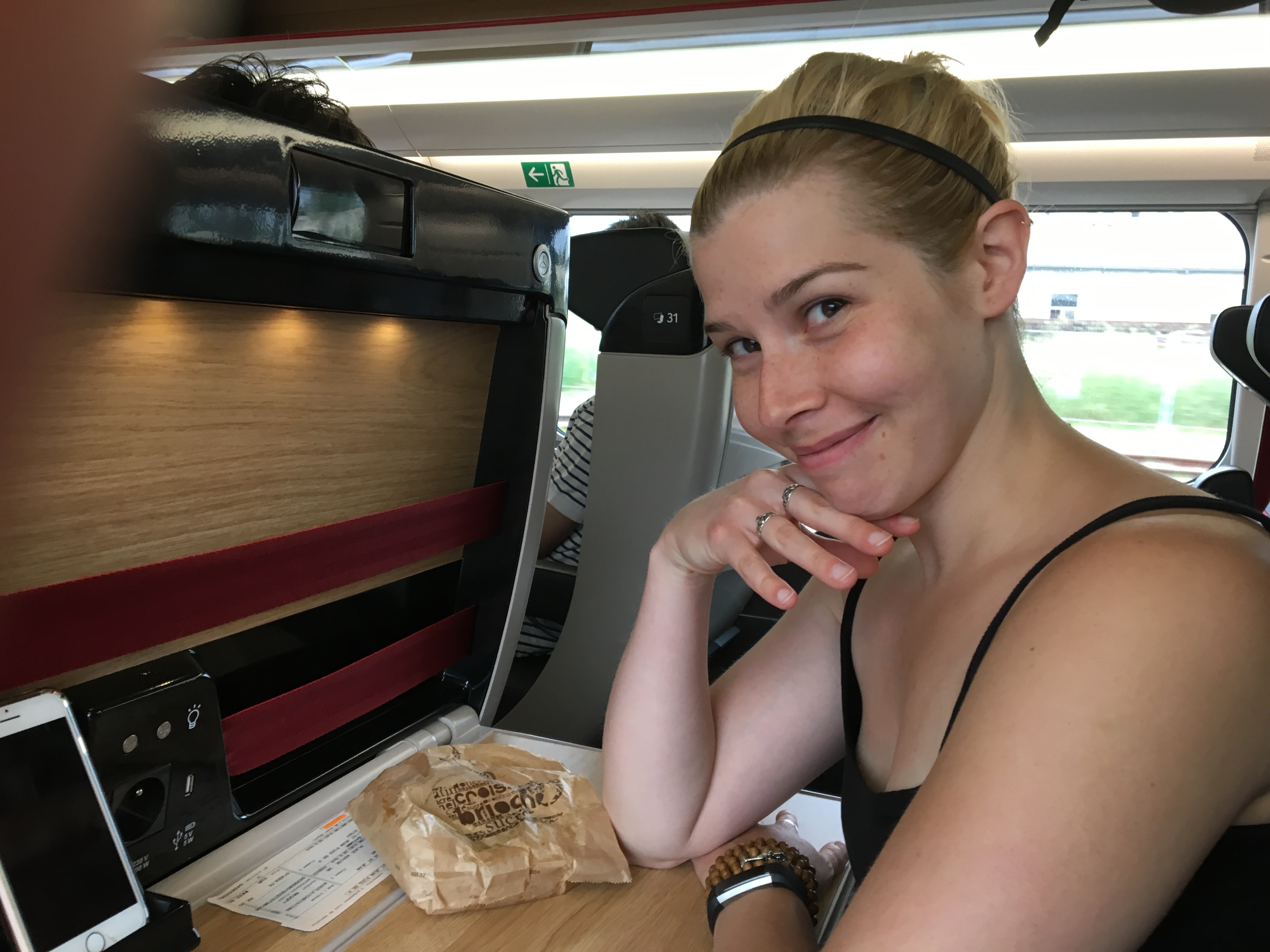 There’s nothing fancy about the second train that takes you right into St Jean, which seems only appropriate for your last form of transportation (besides your legs) for the next five weeks. Everyone sits in little pockets of seats, facing one another, a bit like the back of the NYC buses.

We sat next to a delightful couple of British baby boomers who had rented a trailer “now that the kids are out of the house” and were driving around France on little day trips. Their trailer was currently parked in Bordeaux, and they decided to take the train to St. Jean for a jaunt up the Pyrenees tomorrow. They were kind and comforting, but my brain was still somewhere else. I looked at the mountains passing by, mentally asking them for mercy on our crossing tomorrow. I looked around at the rest of the squeaky-clean pilgrims. Oh, they have no idea. Should I warn them? Nah, they’re here already, they’ll know soon enough.

My brain slid back into the conversation when the woman said, “Oh, you hikers, you’re all so comfortable with yourselves. Ya jus’ walk along, sleep where you want, make a wee in a bush, and you’re off, yes?” In case you were wondering, every single time I’ve had to pee in the woods while hiking, I hear her voice saying, “Make a wee in a bush.”

The train arrived, a bit to my dismay, as I’d started to feel like we were a new crop of Hogwarts students, all getting to know each other. But it was time to get going.

I stepped off the train and we headed up the hill. And there they were–the people from my dream, walking up ahead of me toward the town–the start of it all.

Although my exhaustion still weighed on me, we made it to our hostel, set up shop in our first set of (many) bunk beds and found a small restaurant tucked into the back of the house with outdoor seating beneath the shadow of the mountain.

It’s a bit too much to process–that you’ve made it back to a place after thinking and talking about it incessantly for 8 years. St. Jean looked great, brighter and a bit more lively than the first time.  Though despite its development, it was still the little village out of Beauty and the Beast that I remembered. The main road (path?) cuts through a collection of colorful shops, all topped off with apartment windows adorned with red wooden shutters. Occasionally, the shutters would swing open, and a square woman leaned out to dust out a rug. There is a baker with the bread like always and I suppose a book shop somewhere. 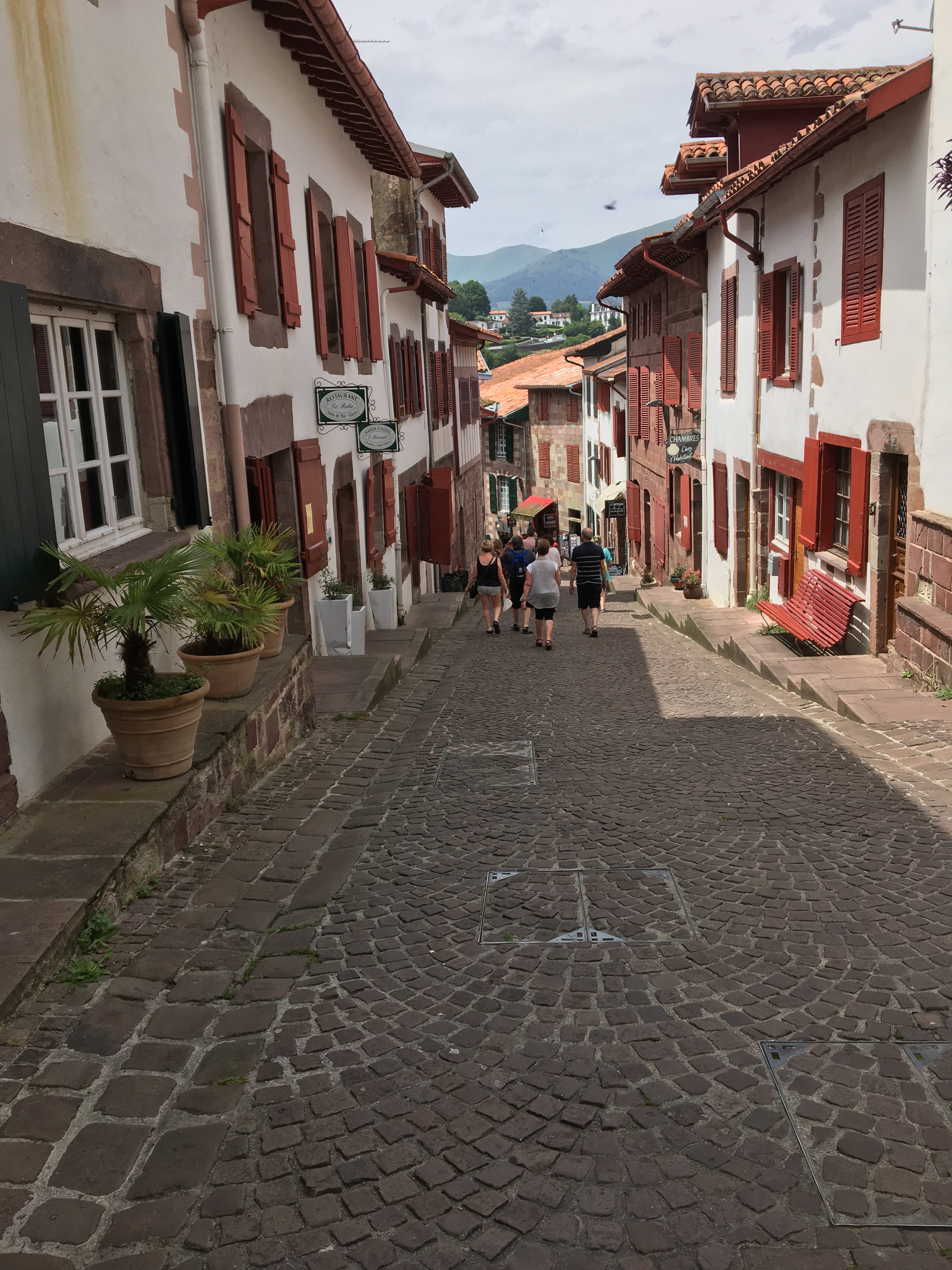 At the bottom of the hill, sits a watchful clock tower, the gate of the Camino path, with the entrance to the chapel and a bronze scallop shell pointing the way at its base. 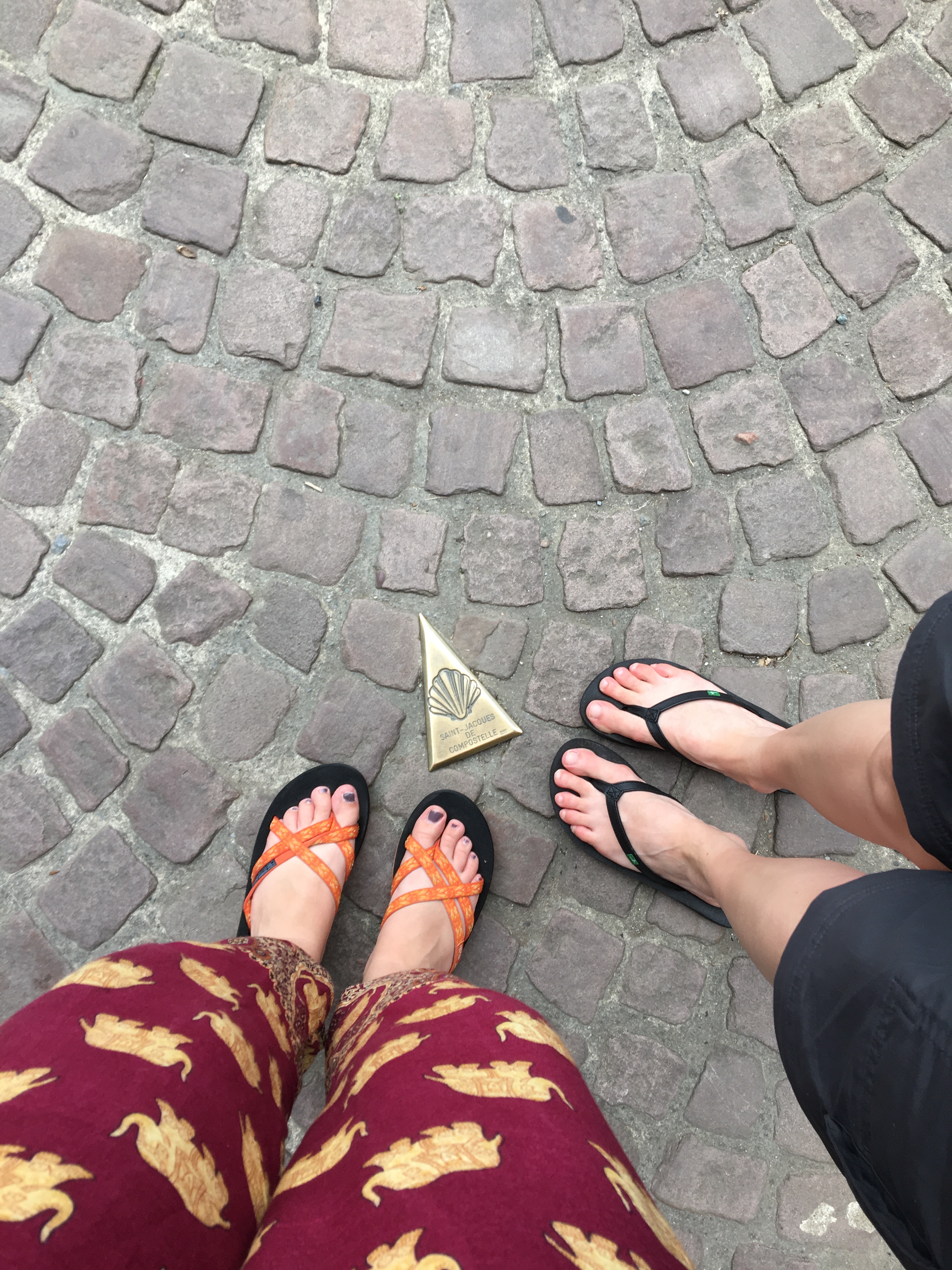 After dinner, and after we checked in at the Pilgrim office for our first sello (stamp!), we hobbled down to the river with some postcards and a pen. Precariously scaling a few ancient steps, we selected the perfect earth-made seat at the edge of the water, peeled off our socks, and dipped them in the cold stream.

A group of children played about 100 feet down river from us, breaking the heavy heat of the evening by flopping back into the gentle current. As I wrote a postcard to Ben–one that would never be sent after getting ruined in my pack the next day–I looked around and took in a breath of true freedom. There’s nowhere else to be. No sights or monuments to check off our bucket lists, no tour buses to catch, not even any reservations to make. Just a stream, a postcard, and the bridge that lead toward Spain.

At that perfect moment, the congregation began to sing, echoing through the 14th Century, Gothic church and into the town. At the sound of their voices, which seemed to calmly serenade the playing children, Christina and I simultaneously looked at each other with a look of, “Ain’t this just grand.”

Even in the all the sleepless nights ahead, when roasting in the Meseta, when sewing my blisters or when taking yet another spider-filled shower, this phrase and idea came back to save me. We are indeed on an adventure, and that’s pretty damn cool. 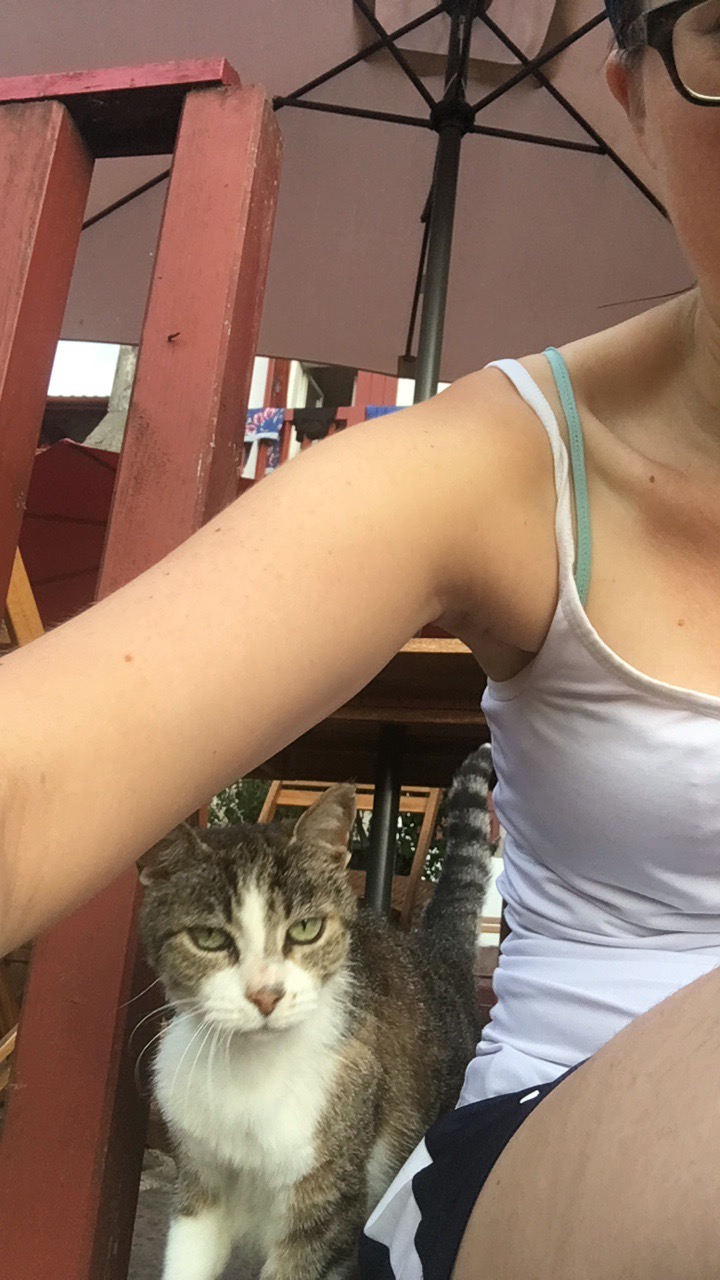 Later that night, I spent some time on the back patio of our hostel as Christina washed her clothes in a bucket and we chatted with a young Australian woman who’d just quit her job. I tried to wind down–terrified of another night without sleep–and made friends with a sweet garbage cat. We headed to sleep before most of the people on the square, and I popped my headphones in to drown out their revelry with nerdy choir music. Though I did fall asleep long enough to not see the sun set, I woke up–yet again–a few hours later, and waited for the night to pass.

This is the song that helped me most through my trip. I later wrote to the composer as a thank you and received a lovely reply.