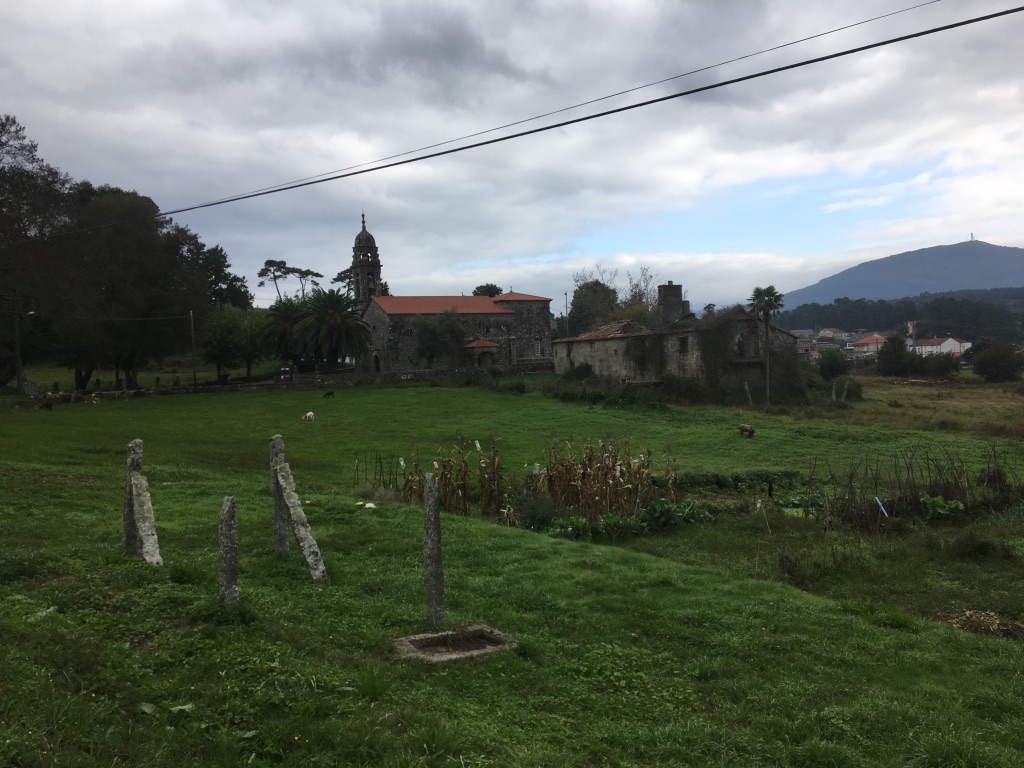 I woke up to a rainy morning in Briallos and was ready to hit the road with a renewed sense of energy despite my aching knee. A sense of great accomplishment after the 28k day and the nearing finish line provided a decent amount of adrenaline for the penultimate day of hiking.

And anyway, the world now looked and felt like my old memories of the Camino. We were finally back in peak Galician nature. Deep, glowing greens, gnarled trees, and fuzzy chestnuts. I looked forward to another long day in these colors, despite the pain. 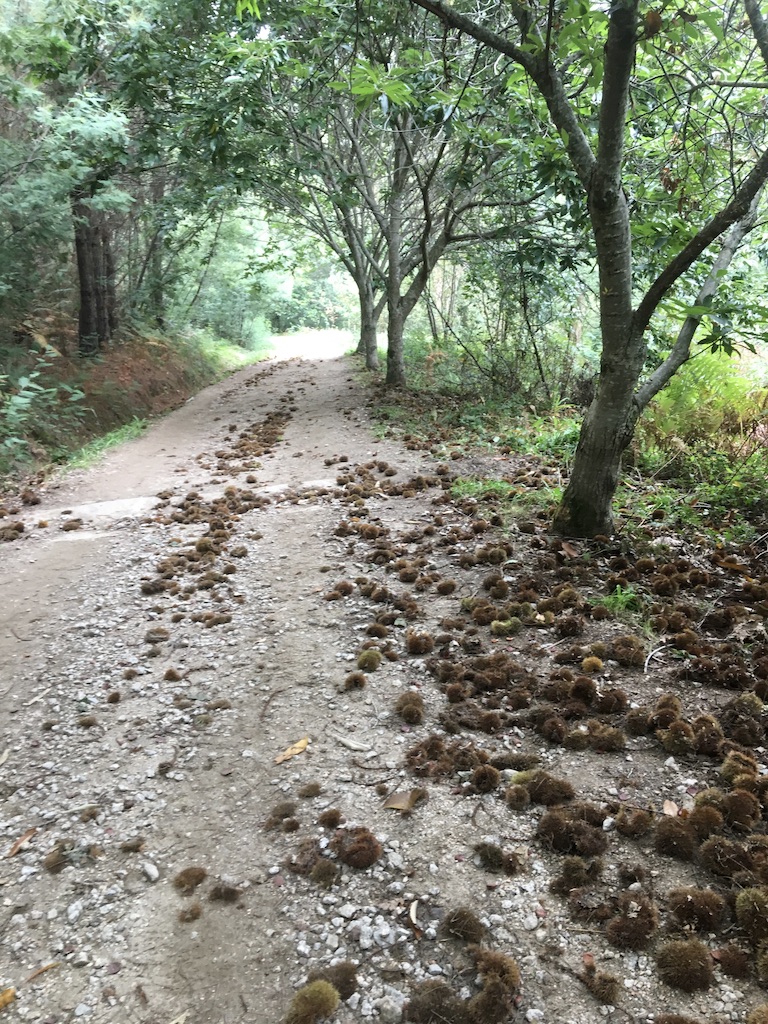 Neha and I walked at our own pace once again, though crossed paths throughout the morning several times. It was clear that 28k days were beyond what my body could handle. I could do it, but I ran the risk of hurting myself. Everything ached and threatened to turn into an injury if I didn’t take frequent rests. It also completely explains why I suffered so many injuries and blisters in 2009 and 2017.

Caldas de Reis was the first city of the day. Meandering through the foggy mist of the city reminded me I was by the coast. Lush palm trees poked up between crumbling stone cathedrals and an endless criss-cross of bridges led us through the town busy with their mid-morning routine.

I found a pharmacy in the latter part of town and explained my ailments to the helpful doctor inside. I picked up some muscle cream and ibuprofen–the European dosage of which always cut through my Camino pains much faster than the stuff at home.

The energy of passing pilgrims was electric. It was time to savor every final moment before this world ended. The pep in their step was also due to the impending bad weather on the forecast. We were supposed to get flooded with heavy rains for the next two days, but I remained hopeful. Many people were even walking 35-40k in one day so their final walk into Santiago was not a soaked one.

I had one hope for the day, however–to get to Padron in one piece. I listened to Sarah Bareilles as I wandered through thick forests covered in dew. I listened to her song, “Saint Honesty,” in honor of the coming storm and our arrival in Santiago.

I wasn’t ready to say goodbye to this family. But it was time to arrive. We’d worked for it and now it was our job to bring this experience home and try to treat everyone like a pilgrim on the side of the road. I’ve always said that if the Camino were its own country, it would be a socialist one. Everything you carry is for someone else. Everything they carry might help you. We are here for each other, despite the solitary inner challenge of the journey. 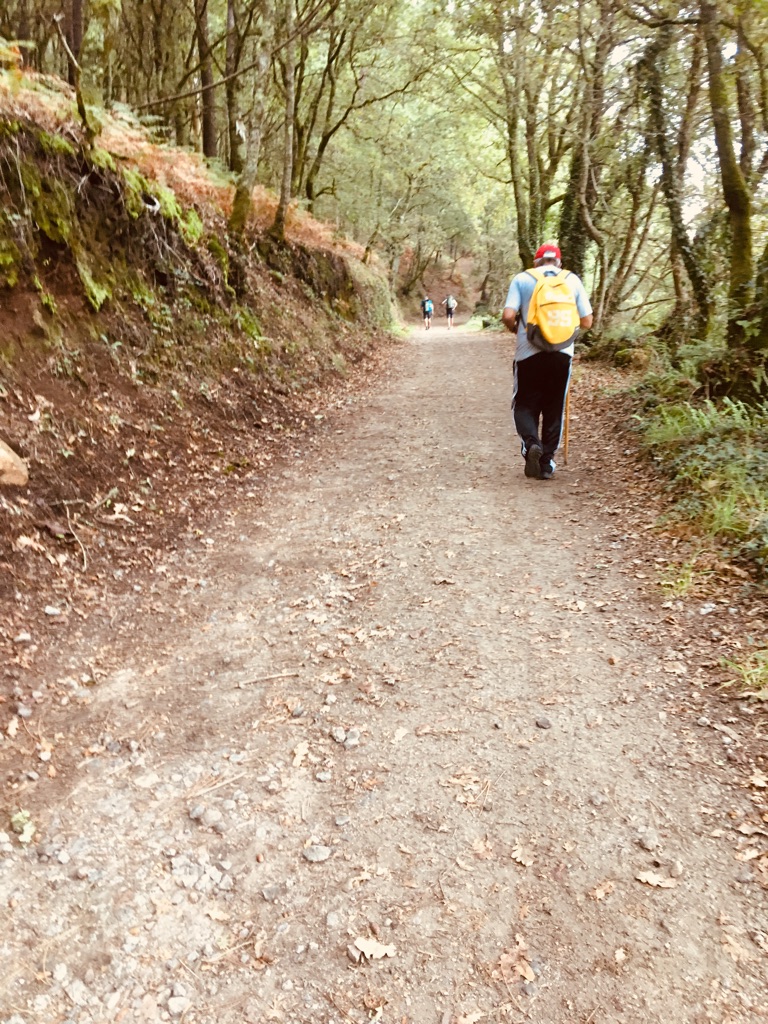 I caught up with some familiar faces at a wonderful cafe with a massive menu and settled into an outdoor table. Just as I was thinking about my past Caminos, I spotted an ice cream bar–yes, an ice cream bar–that made me laugh. In 2017, my hiking partner Christina was on a five-week search for a very specific Spanish popsicle that every cafe seemed to have just run out of. She finally found it right before Santiago. I pulled it out of the freezer and bought it in her honor. 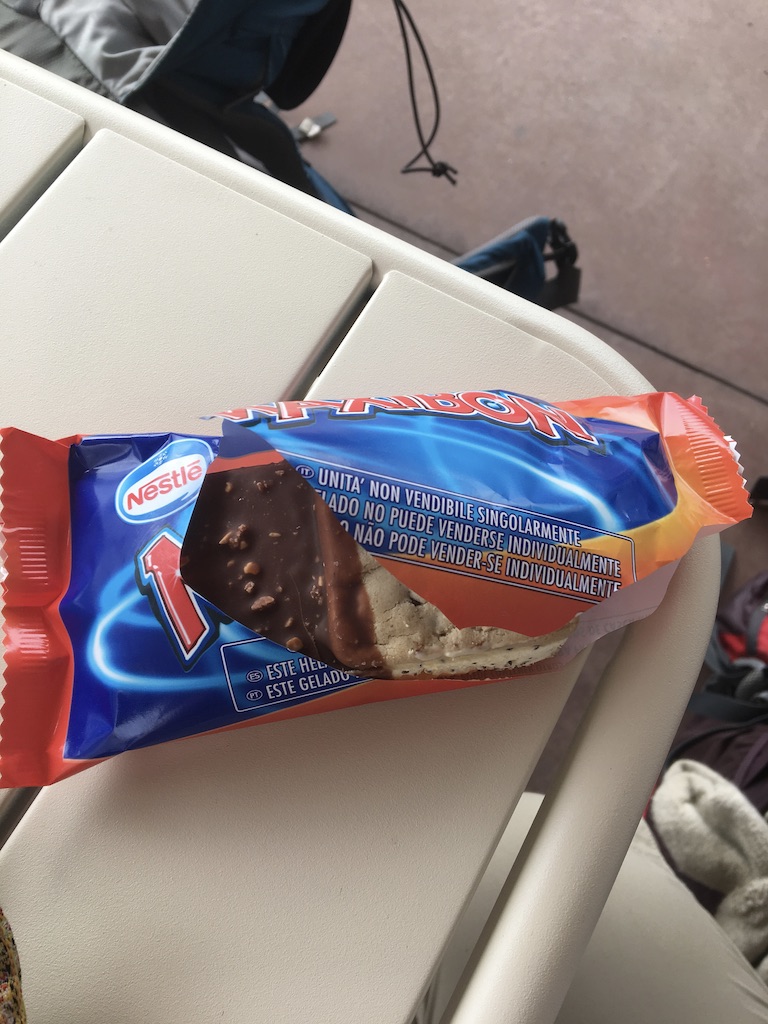 As I settled down with my ice cream, a massive set of explosions banged in down the road, causing me to jump, duck my head, and cover my ears in panic. The owners of the restaurant came out looking joyful, cheering in the distance.

They explained that the area was gearing up for several more nights of a festival–clearly the one we’d head last night–so they’d be testing fireworks for the next few days. It was horrifying to be that close to the explosions. Every time you opened your mouth to speak, “Bang!” you’d drop your fork and send your food flying back onto the plate.

I pushed through the final four hours of the day with a bit of a hobble, but luckily had music and Neha to keep me focused up and down the endless roads and winding paths that seemed to allude Padron no matter how far we walked.

When we spotted the towers of Padron in the distance, giant smokestacks blocked the view. We had one final river to cross before finally entering our final stopping point before Santiago. The last few kilometers dragged on. Every time I looked at my phone, thinking an hour had passed, it had actually only been 15 minutes. My joints ached and I daydreamed of a hot shower. I was chilled to the bone.

At last, we entered the city of Padron–the city where Catholics believed Saint James (AKA…Sant Iago. If you just figured that out, welcome. It took me a year.) washed up on shore covered in scallop shells after he was beheaded by King Herod. The cathedral is in his honor and the city is considered an important stopping point in the tradition.

Our hostel was in the center of town right across from the cathedral, and our friends we already outside with liters of beer and plates of various snacks.

I didn’t feel quite right as I checked in, so I spent some time in my bed pod (yay more bed pods!) to warm myself up from the day of rain. On another day, I may have just gone to bed right away, but this was our last night as pilgrims together before we arrived. This is what the reserve tank was made for.

I headed back outside, suited up in all the layers I’d brought to stave off the cold, wet air. I called my parents to wish my dad a Happy Birthday (BTW, it’s my dad’s birthday today! Happy Birthday dad!) and settled back down at the table. 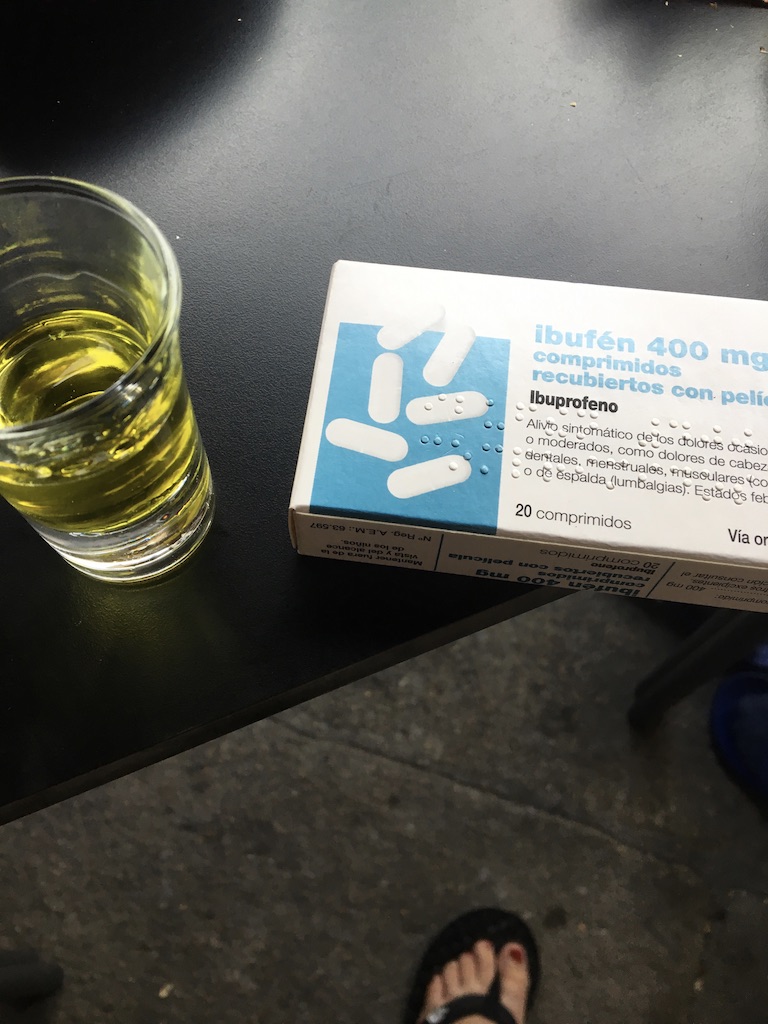 Faces from throughout the journey appeared around the corner, just as haggard as I had looked an hour prior. The girl who had been bitten by the dog was there. Maria was there. Barbara and Neha were there. Even Julian–who had taken a popular detour that lasted several days–sped up his schedule to meet us for the final night. Sophie spent the night in another nearby town recommended as a quieter refuge on your last night, but we’d see her in Santiago soon enough. 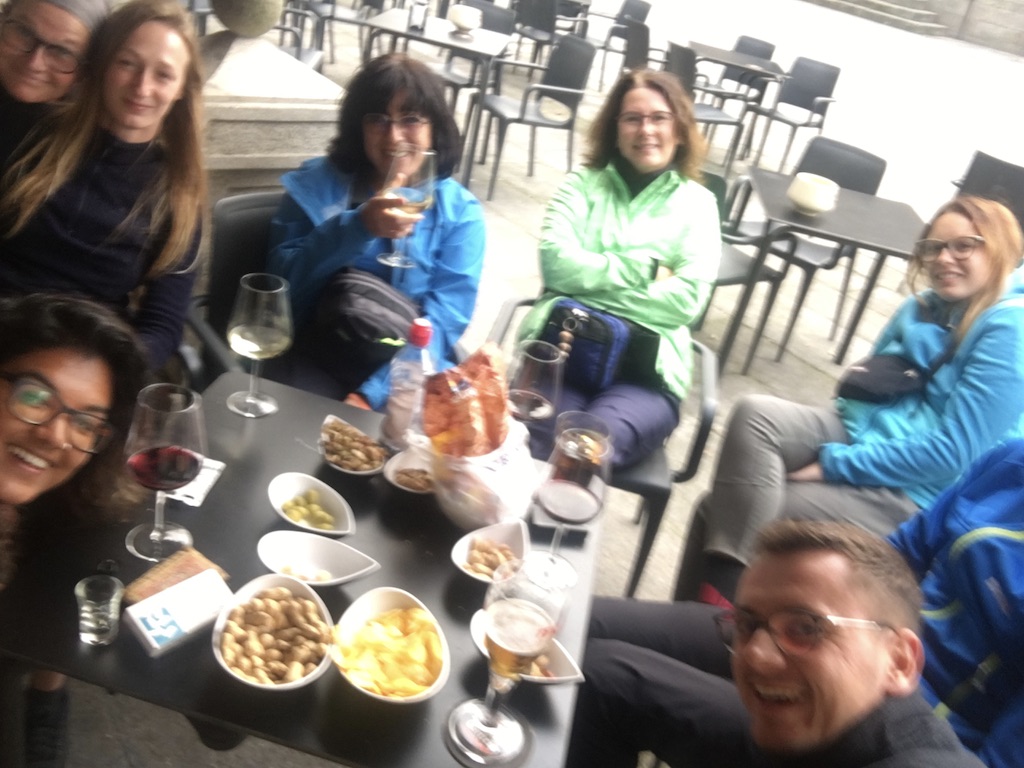 We drank whatever people brought out for us. Rounds of beer, wine, orujo (a Spanish grappa that will take the paint off your car) and endless tapas that varied as the sun slowly set. A few new faces joined us as well, including a grandfather and 10-year-old grandson who hiked faster than all of us.

When all this alcohol kicked in, we realized we should have a proper dinner so we weren’t a disaster in the morning. Like a hurricane of celebration, we took over the front of a poor restaurant, pulling all the tables together despite my desperate attempts to work with the waiter in a more polite fashion. In our confusion of how to order for such a large crowd, we generally pointed to the one side of the menu and the waiter came back with plate after plate of chicken, pork, potatoes, and squid. We had a feast. 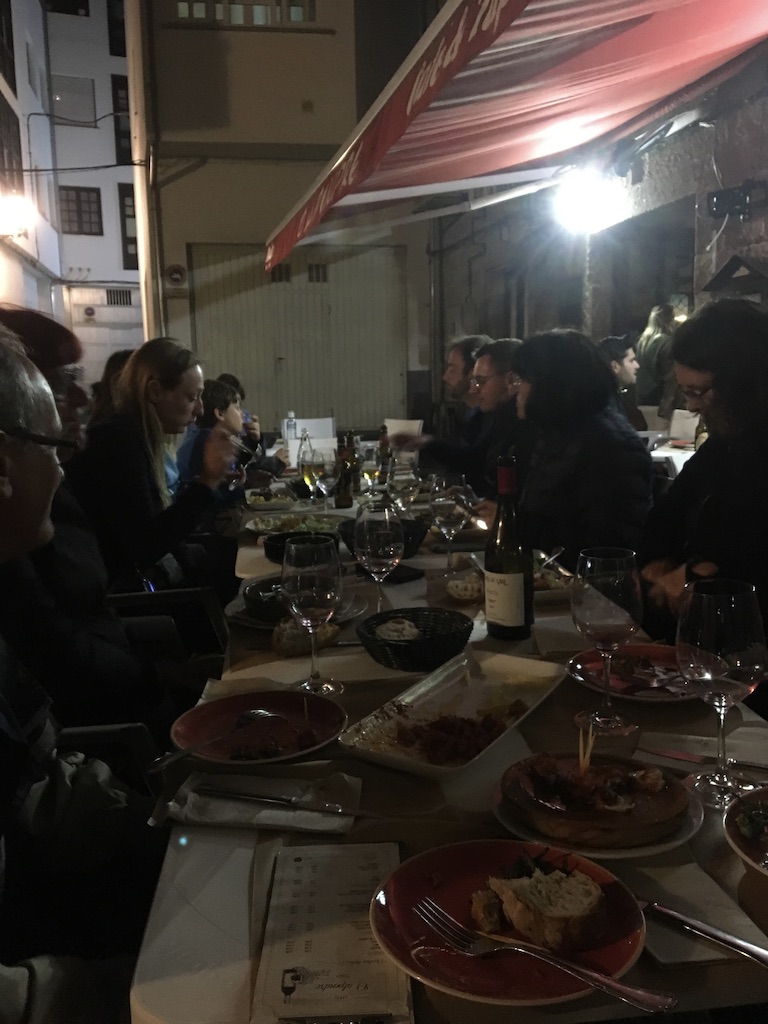 On the way back to the albergue, the full moon filled the streets with light, even as it tucked behind the ominous steeple of the cathedral. We laughed and reminisced about the funny things we all had to do to keep our act together over the past several days to get here. Through falls, sprained ankles, and exhaustion, we had somehow–almost–made it. I thought back to my loneliness in Porto and the worry that I’d never meet another pilgrim.

Barbara, inspired by the moment, broke out into Frank Sinatra, belting the lyrics to “My Way,” as she danced between us. 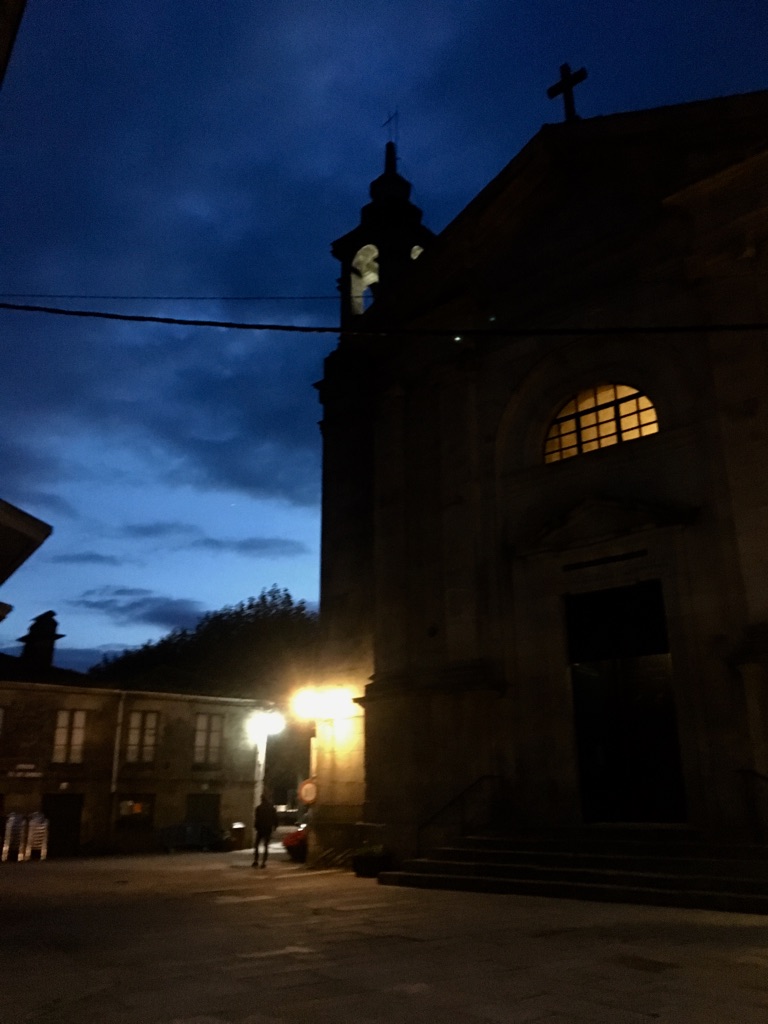 We tiptoed back into the albergue and crawled into our pod. I knew I was in a bit of trouble when I closed my eyes and the room slightly spun up and over my head.

I would like to tell you that I woke up for my last day walking into Santiago to sunshine and a renewed sense of health and wellbeing. However, when I did wake up, it was 2am and pitch black. As soon as I opened my eyes, I knew something–I was going to throw up. In the darkness, I made my way down my bunk ladder and ran quietly toward the bathroom, setting off all the sensor lights as I went (who designed that?!).

If you know me well, you know that I am incapable of throwing up. It is not a super power, it is big ol’ malfunction. My body will not do it, even when it should. So instead of feeling better, I sat on the floor of the bathroom for the next hour, deep breathing and listening to the torrential rain pound against the window. The storms had already arrived.

How was I going to walk in four hours? It was a long day so I didn’t want to sleep in. But would I even sleep? My knee ached and all I could think about was the piles of spicy food on our dinner table. Still, my body refused to do anything but feel extreme nausea.

After too long on the tiled floor, I dragged my pathetic self back to my bed, yet again setting off the sensor lights by friends attempting to sleep. Rain seeped in through some of the windows left open, and I quietly closed the shutters to keep our packs from getting soaked.

In four hours, I’d have to face the music. Until then, I tried to sleep, even as my world rocked back and forth and the memory of pork and squid taunted my memory.