Don’t fear your kitchen, friends!  I know many people who still say that they shy away from cooking recipes that involve anything past opening a Trader Joe’s bag and throwing it in a skillet.  Especially if you’re a creative type, there’s no reason for this.  You don’t have to own a million cookbooks, scour the internet for hours, or buy fancy schmany ingrediants from Whole Foods.

(This post brought to you by too many days stuck in the house with a cold and our trusty friend, Pinot Grigio)

The wine bottle in Ben shaped!

Ben and I have gotten to the point in this cold/bug where we want to eat everything in sight.  Unfortunately we’re not exactly on the upswing yet, which leaves us inside all day pondering when our immune systems will kick in and what fresh air feels like.  I suddenly had the urge to fill this food void with cooking.  And I highly recommend this tactic for whatever reason you may be feeling “stuck”.  Creating something, especially something that leads to yumminess, can help you feel less crappy about that stubborn acting career any day.

A friend once told me that if you like a bunch of ingredients separately, not much can go wrong if you throw them all together in a pot and turn on the heat.  Add wine and a little knowledge of how foods get along, and that’s pretty much where I start.  This was vaguely inspired by some other recipes I sorted through, but in the end, I improvised.  And so can you! 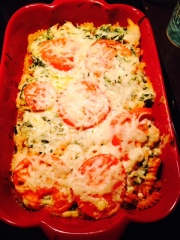 (aka Baked Pasta Florentine Casserole with Parmesan Encrusted Chicken).  Apparently things with spinach are called Florentine because Catherine de Medici was really into Spinach and made it popular in Florence.  I hope some day I am named after cheese sauces made with beer.

Note: Using words  like “encrusted” make you feel and sound fancier in the kitchen

I admit this recipe has a lot of steps, but all of the ingredients are easy to come by and have multiple uses so are worth the money.

2 chicken breasts (preferably ones not full of creepy hormones, but you know, do what you can)

A bunch of Parmesan Cheese (I used the crappy Kraft stuff but if you use nicer cheese, you can use less salt and it will be crispier)

1 Egg white (If you’ve never separated an egg before, watch this video http://www.youtube.com/watch?v=yAGX-54iR30.  Or come over some time, we’ll separate some eggs!  Hello wiiiine.)

Salt and pepper (and whatever spices inspire you.  Garlic salt always wins)

Half a box of pasta of any shape (Except like spaghetti or something, that would get in the way.  Think about how you want the bites to feel.  No way to make that sound less creepy, I tried.)

White wine (Pinot if you’re drinking it too!)

This recipe is all about timing, and it’s a great way to learn about juggling various things in the kitchen at once.  If the timing gets off, nothing bad happens, so don’t fret.  But the better timed it is, the faster you eat it.

1a. (because I forgot to write this before and renumbering is for suckers) Preheat oven to 350.  If you have a convection setting, don’t use it.  It dries out meat.  Who knew!

1b. (again with the forgetting) Begin boiling water for pasta.  Add some salt.

-Get a large sharp knife and slice the tomatoes in medium slices.

-Fill a container with olive oil, oregano, salt, pepper, and whatever your heart desires.  I have this nifty Trader Joe’s grinder that covers everything at once.   I highly recommend it.

-Distribute tomato slices in oil mixture and toss about

2a. Microwave frozen spinach for 3 minutes.  During the chicken prep, this should finish.  So just toss it in a strainer.

We’re in the oven!

-In a small bowl, separate your egg white and place yolk aside for later.

-In another bowl, pour some parm

3a. At this point your water should be boiling, so throw in the pasta, cook for 7 minutes.  Not longer or it’ll be goo after you bake it.

This picture is sideways. Do I want to go change it? No.

-Give your spinach in the strainer a good squeeze to get the rest of the liquid out.  I’ve studied that if you’re in a good mood when smushing food around, your meal will taste better.  Worth a try?

-Combine spinach, ricotta, a handful of mozzarella, salt and pepper, and that whole egg from before (both the egg white and yolk).  If you have extra ricotta left over, you can make lemon ricotta cookies, which I’m tackling tomorrow.

Mix it up, put it aside.

We’re out of the oven! Okay, the chicken will stop talking now.

-Take it out of the oven and slice into cubes.  If you slice against the grain of the chicken, it will be more tender.  Also, don’t fret if it’s not fully cooked, there’s time later.

-Strain and add that glob of tomato sauce.  It gives it a little extra moisture.

-You can really layer this how you like but this is what I did, from bottom to top:

-Cover entire casserole dish (I didn’t have tinfoil so I put a cookie sheet on top.)

-Casseroles should settle at room temperature for a little bit to congeal so depending on how much wine you’ve had, try to give it 5 minutes.

-Also, turn off the oven and stove.  Drinking and cooking can be sneaky.

And there you go, it’s been an hour and you’ve created something!  And now get to eat your art!  Hell, maybe you even wrote a blog post while it was cooking!