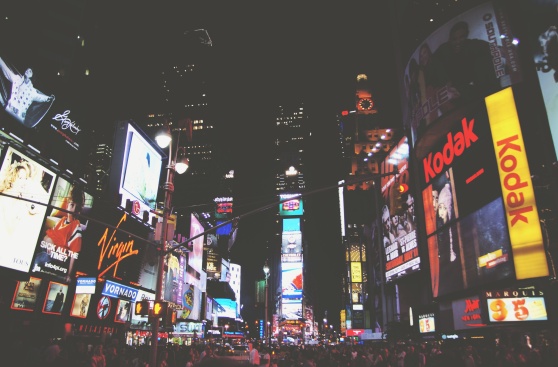 I may now live in North Jersey, but I put in my time living in Queens and Jersey City (which we considered a borough of Manhattan- I mean seriously, it is) for seven years.  I have also worked/trained/performed in NYC since my dad started taking me to auditions when I was ten.  Back then, I had the right to be terrified of NYC.  It was the mid-90’s, and no one wanted to spend a lot of time lounging in the delightful place it was then.  At that age, Manhattan was about large pushy crowds, walking much farther than I thought my little legs could carry me, intimidating auditions, and tunnels that kind of smelled like pee.  Going into work with my dad was always fun, and yes, I did love acting, but if these two things could have been outside of Manhattan, I wouldn’t have been heartbroken.

Another twelve years passed and the time finally arrived- I had to move to NYC.  I have always been an actor, and since the energy of LA will never be my style, I knew this was my destiny.  I started an internship with a wonderful company in 2010, and eased my way into the NYC life by commuting from home for several months. Then in September, I had take the leap.  I found roommates on Craigslist, put a deposit down on an apartment (more cash than I have ever handed over in my life up until that point) and settled into Astoria on September 1st.

I have to say, I was very lucky during my transition.  I had two part-time jobs going in (the internship and at Crumbs Bake Shop), and a fantastic boyfriend who lived exactly 11 blocks from my apartment, who had lived in NY for many years.  If it wasn’t for Ben, I would have shuttered myself in from the noise within a week.  Thus began my love/hate relationship with my time in NYC.

During the first several months, I ended my day frustrated and tired.  I couldn’t even figure out why for a while.  I knew I worked long hours and was in a difficult business, but none of this was new to me.  The problem was my lack of self-awareness of how I responded to crowds and unwanted attention- and how much this began to change who I was as a person.  It wasn’t until I tried to talk back to the creepy cat-calling guys who sat outside the laundromat (to which they only cat-called and laughed more loudly), that I figured out how much this negative energy was changing how I saw humanity.  I walked, crying the whole way, to Ben’s, and explained how small this made me feel, and how helpless women are in these situations. My only option was to never walk past the laundromat again.  And that sucks.  Standing up for myself to a pack of large men?  Yeah, that went well.

I am starting a website this fall based on what I learned from living in places that originally intimidated me.  I have always tried to make the best of every situation, but fighting against the constant intrusive forces of NYC was a massive struggle for me as an introvert (something I didn’t even know I was at the time).  Exploring a neighborhood and somehow making it feel like a community was my only defense against this alienating attention I received just by stepping foot outside.

Even today, wedding ring and all (though even mentioning that being married should deter creepers from staring at you says that something is wrong about our society), I build a cinderblock wall of “don’t you stare at me, weirdo” around me.  And I don’t know what it is about a tightly packed city that encourages this breach in personal space, but it doesn’t happen to me at home.  I’m sure it has to do with the empowerment of anonymity, but dude, I am sure you wouldn’t want someone staring at you with bad intentions, so don’t do it to me.  This is the progression of unwanted street attention:

By the end of the day, I’m closed off, angry, and frustrated with the city as a whole- even though I know this does not represent NYC in the least.  Or men for the matter!  I know hundreds and hundred of polite wonderful men, I’m married to one!  There are also countless things I love about the city, otherwise I never would have maintained this lifestyle for so many years.  But as someone who strives to remain mentally present, a city that pressures you to shut off in oder to make it from place to place will never be healthy for me.

I have found my havens in NY, and though I can’t realistically spend my whole day sitting in a rehearsal studio or a small empty coffee shop, these are my only ways of recharging after losing my patience in midtown.  I can take the crowds, I can take the smells, I can even take MTA’s inability to act like a functioning transpiration system.  But the anonymity inspires inappropriate and intrusive attempts to connect- and from most women’s perspectives (I will never pretend to know how every women feels), your intentions are not positive.  If you really want to go out of your way to connect with someone, female or male, there are polite ways to do this.  I have had (usually older) men stop me on the street and say that I look nice today.  Do I freak out and smack them with my handbag?  No– this is flattering, it is normal human conversation.  It is very generous for them to take the time to say so.  It is the same way this man would talk to someone he respects.  Grunting under your breath or glaring with wild eyes as I walk down the subway steps?  Stop that!  That is not okay, and it makes me feel not okay.  Some people may be a little unhinged, and I do empathize with someone struggling with mental illness, but most of you are businessmen who need to be reminded how to act in public.

After years of trying to block this out, I have accepted that the life of a true New Yorker may never be for me.  We moved after several years, though we both go in nearly every day for work or class.  It’s a smaller part of my life now, and I have become a significantly happier person because of this.  I even like the city more than when I lived there.

I am probably kidding myself to think that a city as large as New York will ever develop a healthy enough community to make actions like this unacceptable, but I can dream.  If you want to talk to someone, treat it the same way you would in a small town.  We may all be packed together like sardines most of the time, but we’re all trying to get to the end of the day without burning out. A little respect and kindness will go a long way.  Until then, I will happily remain a proud Jersey Girl.