An Acting Lesson for Troubling Times 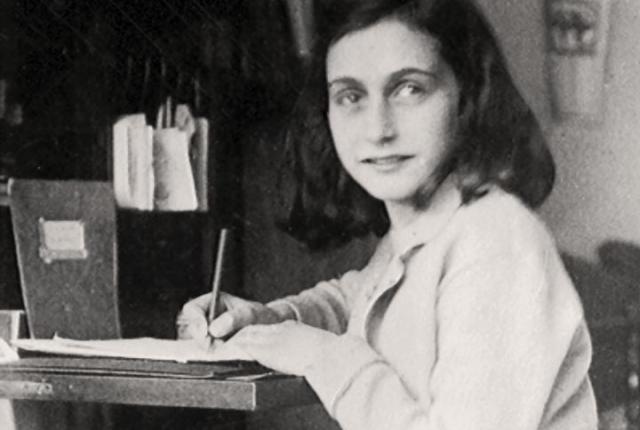 When I was twelve, I played Anne Frank in a local theatre production up in the mountains of North Jersey.  It was in one of those performance spaces that makes you miss the community theatre scene–a sturdy, 19th-century chapel in the center of town, with original wooden pews, a lady bug infestation, and the smell of books and old coffee.

The timing of this show was a major comfort for me and my family, it was just over two years since we had moved from Plainfield, a town that had become so dangerous that we purposely “disappeared” with as little a trace as possible.  These were the days before the internet, and so all you needed to do was select being “unlisted” in the White Pages, and bam, you were off the grid.  Studying Anne brought such solace to me in a time when I felt that I had also up and left my friends without a mailing address.  The door simply closed on that old life.  Unlike Anne though, I started a new one.  I was welcomed by a chance to play in the woods, to ride my bike until the sun went down, to meet new friends, and through that, work with new theatre companies.

I had a pretty lucky theatre ‘career’ as a kid, I probably worked more then than I have as an adult so far.  But up until that point, I hadn’t dealt with a role with such a massive line-load as Anne.  I also spend 99% of the show on stage, only stepping behind a flat to change during the second act; and of course, I did not come in the final scene, when Otto Frank returns without his family.

But my primary focus was on my lines, of the logistics of staying on stage that long, of the ins and outs of imitating and embodying a historical figure I had already looked up to for years.  You can learn a lot about someone’s energy and enthusiasm for life through their writing voice, and perhaps this is why we’re all so drawn to this girl.  I studied the way she viewed the crumbling world around her, how she always maintained empathy and a belief in others’ goodness, even when she got angry and frustrated and panicked.  I connected with the fact that she had terrifying nightmares that woke her up mid-scream (at least this is how its depicted in the show).  I grew up with nightmares, and still either sleep walk or wake up gasping for breath from time to time.  But most of all, I remember obsessively retraining myself on how to hold my pen–sometimes the two front fingers connected to the pencil, my thumb on the other side, and sometimes the pencil between the fore and middle finger, something that took a good deal of practice.  I still catch myself doing these from time to time.

And so I learned to sit like her, to speak in a rhythm I believed she would have used, and to sink into the small world of the annex; as in real life, I played with the ladybugs and stared out the church window at a similar chestnut tree she describes in her diary.  In the end, as with all roles, I am still me, and so we slowly became one, walking and talking in tandem.  In the early days of living in a new town, she was a friend.

About a week before the show opened, PBS aired a special on The Diary of Anne Frank, but this time, paired with additional knowledge of her life before and after the annex.  My mom (who played my mother in this production–this was a habit of ours) and I made a night of watching the well-timed special like it was added research, a way to celebrate getting to the end of the rehearsal process.  But unlike the diary, and unlike the play, this tv special didn’t leave out that part in the middle–the part historians and Anne’s father had pieced together.  The part about the train, about Bergen Belsen, about what it’s like to die from Typhus, about her final moments with her sister Margot.  And for whatever reason, I hadn’t processed this, I wasn’t prepared to witness the reality of what happened to my new friend.

For about thirty minutes, I was inconsolable.  I remember sitting in my room and heaving, gasping through sobs, fully processing that this girl I had embodied was murdered so cruelly–as millions of others were–and no one was able to stop it.  I cried because I had escaped my hell and she hadn’t.  I cried because as a child who was also obsessed with her journal, with the power of self expression, with a hope for nature and for human kindness–that it wasn’t enough, that my outcome was not common.  I cried because it could have been stopped, and by doing what I had done–by just learning the lines and going through the motions–a lack of humanity and empathy had shielded politicians and every-day citizens from seeing that by protecting themselves, they were killing others.

My rage and exhaustive sadness started to clear as the night went on, and my mind shifted to tech week.  My fear of the lines persisted but there was something else there now.  I had seen the story for its truth.  My breakdown, my facing of the horror, was necessary in order to move deeper instead of going through the motions. On the other side of things, I still had to set my props, I still had to speak clearly, and I still had to support and protect the other actors on stage with me.  If I had remained in my state of shock and rage, I  couldn’t have gone on telling the story that needed to be told.

As artists, we are taught to watch people.  And as I watch the patterns of my friends and family online and in person, I see the actors in all of them–and I don’t mean this as an insult.  I see those in the stage of learning the lines, of looking for practical reasons to hold on to their old beliefs, instead of looking into the face of human tragedy.  We have to protect ourselves to a certain extent, I understand that.  And often, as I did, we look for other–more pragmatic–facts and distractions to cling on to.  We don’t want to believe that our actions could cause harm to someone else, that goes against the type of person we know we are–realizing this it hurts too much.

And then I see people in the next stage of grief, in the weeping, in the panicking, in the necessary catharsis that comes with breaking through the protective wall into our hidden, bottomless pool of empathy.  And though it leaves you temporarily paralyzed, it frees you from the cave, from watching the shadows of true life dance by you as you pretend that perhaps, if we hope enough for it, everything is okay.

I see these people–both groups–and I appreciate their strength for going through this, but they need our support.  The first group, the one that denies today’s difficult realities by seeking alternate truths, less painful realities, they are learning their lines in order to put one foot in front of another, but they are being robbed of a life of empathy and human connection.  And then there are the people who feel so trampled by their painful enlightenment that they fall more deeply into themselves and close off to others.  When I played Anne Frank, I was lucky.  I had my parents close by, I had a supportive cast to prop me up and keep me going, I had a project to complete and a story to tell.  Many of us now feel we do not have that support, and so, we need to be that for each other.

We need to experience this trauma, this shock, this realization that there is more to life than distracting ourselves with convenient facts.  We need to get upset.  But then we need to set our props, and carry this enlightenment on stage with pride.  We need to reach out to our cast members and connect with them when we, or they, need support.

On the other side of things, I see so many people who are much farther along in their empathetic efforts than I am–they get up, go out, protest, speak for people whose voices have been stolen.  They write, they perform, they call their representatives, and they gather others around them in solidarity.  And when the shock of more painful news hits them, they get back up and go on with the show.  I thank you all so much for inspiring me to continue to challenge my own understanding of the world, and to get up in spite of it, instead of closing off.

I know that if Anne had the chance to continue fighting for justice past her time in the annex, she would have.  And even without that time, she still inspired millions.  I will remember this each time I collapse into despair, and I will hold my pen with two fingers over top of my thumb as a reminder to stay diligent, to stay disciplined in my art, and to hold strong to my belief in the innate kindness and hope of humanity.

As this blog is place for my personal expression and processing, I ask that you only send political beliefs to me directly, opposed to commenting below.  I appreciate your thoughts, but encourage you to walk around with anything that comes to mind before responding too quickly, especially as we are all feeling so raw.  As always, thank you for reading.  Much love and peace to you.

This post is in response to today’s Daily Post, entitled “Scent,” as I am brought back to the theatre overtime I smell old books and coffee, and to Erica Varlese’s weekly challenge, “Speak Out.”

9 responses to “An Acting Lesson for Troubling Times”